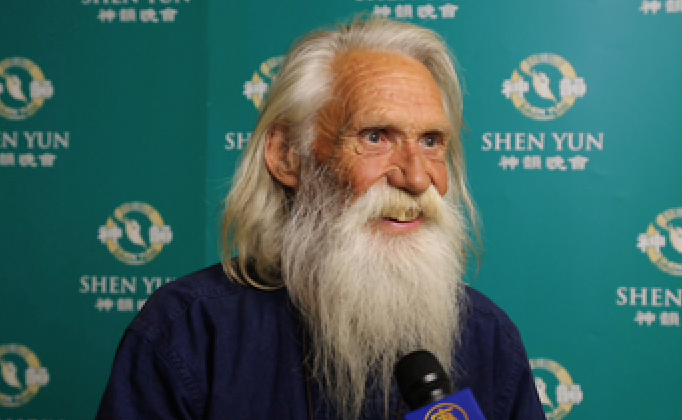 AIX-EN-PROVENCE, France—As the sun set in Aix-en-Provence on March 10, Shen Yun’s last performance at the Grand Theatre de Provence was coming to an end. Many theatergoers came out with a smile and several dancers and former dancers, present that day, expressed their admiration.

“I’m really happy, I have never seen such perfection!” said Jean-Jacques Béchade, a former dancer at the Paris Opera. “The costumes, the colors, the movements, the choreography is pretty … And true beauty comes out as they all have it inside. I found it really appealing.”

According to Shen Yun Performing Arts’ website, the performance presents “the best classically trained dancers in the world.” The dancers’ training includes the assimilation and repetition of a very large array of very technical movements, like somersaults and flips. Even the slightest hand position must be very accurate.

“If a movement is not done perfectly, the message it carries may be different,” said Angela Wang, principal dancer, who accomplishes a hundred flips per day to maintain her level.

Mr. Béchade admitted that he had “never seen such perfection” and recounted his own experience as a dancer in training and on stage.

“When I was at the opera, our movements were all different; we got reprimanded for it. Here, when we see a dancer’s movement and then look at another [dancer] that does exactly the same movement, it makes one think: how is this possible, how can it be so perfect? To reach such effortless perfection—it’s completely baffling,” said Mr. Béchade.

Myriam Morange, who has been dancing for forty years, was another stunned dancer in the audience.

“I was amazed at the perfection, the beauty, the positivity, and the fact there is a spiritual side that uplifts it all. It is sublime,” she said after seeing the performance.

Throughout history, the company’s website points out, almost every culture looked toward the divine for inspiration. “Art was meant to uplift, bringing joy to both the people who created and experienced it. It is this principle that drives Shen Yun performers and their art.”

Mr. Béchade commented on this aspect saying that he was stunned by the spiritual quality in Shen Yun: “There is so much beyond us. Spirituality must be present without ostentation. And that is the advantage of this company, nothing is overstated, they do it simply. They present traditional dances, folk dances with handkerchiefs, tell legends. I want to see more. I am amazed. I’m stunned!”

Ms. Morange was also looking forward to Shen Yun’s return saying: “This is the best show [that I’ve seen] in Aix in 20 years. I hope you’ll come back!”

She also mentioned that the beauty evoked in the Shen Yun performance had added meaning.

“It is sublime, yes it is sublime. Beauty, in the sense that there is something sacred—when beauty is in communion with the sacred, that has [real] meaning,” said Ms. Morange.