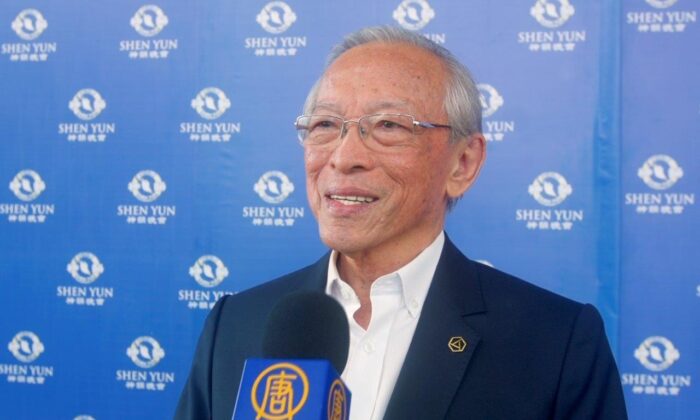 LIMA, Peru—World-renowned Shen Yun Performing Arts has been touring the globe for 13 years, reaching more and more cities every year. In Lima, Peru, at the Gran Teatro Nacional, four performances over the weekend of Feb.8–9 were completely sold out.

“It touches you, the beauty, the aesthetics, it really touches you,” Lay said. “Really impressive perfection. The choreography, the message they convey. It really is an ancient art that has been updated. It doesn’t look old-fashioned, on the contrary, very up-to-date, combined with modern technology. All that makes it a show that is unparalleled.”

Shen Yun’s mission is to revive the once-lost traditional Chinese culture and share it on the world’s stage through the art. The ancient Chinese civilization is said to be divinely inspired, and Lay felt this spirituality speaks to us in the modern world today.

I believe that this message [of Shen Yun] is very relevant to the current situation of mankind.
— Umberto Lay

He felt one key theme of the performance was a reminder “to return to spirituality.”

“It’s very necessary in the modern world, or the post-modern world we are living in, where the only thing that is worthwhile is the present, to live in the moment, no values, no ideals,” Lay said. “I believe that this message [of Shen Yun] is very relevant to the current situation of mankind.”

In ancient China, Buddhism, Taoism, and Confucianism were cornerstones of civilization and permeated every aspect of society. Lay added that this was different from his own faith, but the idea of returning to spirituality and higher ideals in and of itself is universal and beneficial.

“The appeal or word of encouragement to return to spirituality is very, very important. I think everyone will understand it in their own way, but I think it is very important to get out of the material, out of this materialistic humanism that we live in, and to recognize again that we are matter, but also a spiritual part, which is the most important thing,” Lay said.

“[Spirituality] has an effect on behavior, based on values. I think it is very important. It’s something that has been lost tremendously in recent times,” Lay added.

Lay wanted to encourage Shen Yun in return, urging them to persist in “defending this tradition that is ancient, but with values.”

“I think it’s important as a message to the new generations that have been born in a world that has lost its values, its ideals. I think the work they’re doing is very important,” he said.