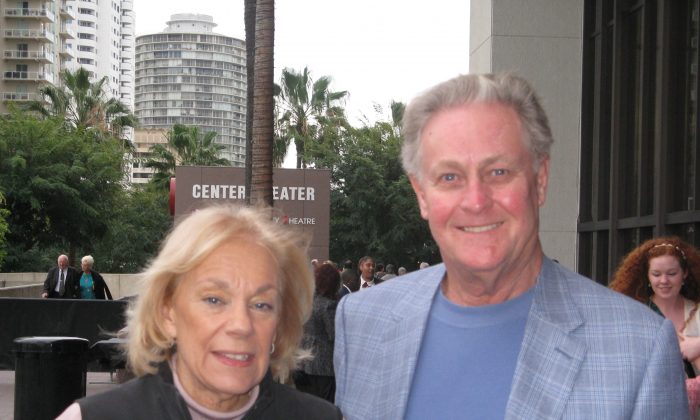 “It was spectacular—beautiful dancing and choreography and interplay of technology,” he said. “Good music—very pleasing and gratifying.”

Shen Yun is a New York-based, classical Chinese music and dance company that includes the world’s foremost classically trained dancers, an orchestra with all-original compositions that combines both traditional Eastern and classical Western instruments, and a digital, animated backdrop that complements each piece.

Shen Yun has received worldwide, critical acclaim for its stunning beauty and innovative use of technology to transport audiences to distant times and lands.

Its website explains, however, that “digging deeper, one discovers a sea of traditional Chinese culture.”

“Principles such as benevolence and justice, propriety and wisdom, respect for the heavens, and divine retribution, all come to life, washing over the audience. Originating from Confucianism, Buddhism, and Taoism, these ideals are the essence of traditional Chinese culture,” continues the web site.

Mr. Hendrickson, who has held positions in the management of various cities throughout California for 35 years, particularly enjoyed one such story-based vignette entitled The Power of Compassion in which a violent policemen in modern day China changes his ways after experiencing compassion from the very people he was persecuting.

He said the piece was very well done, and he enjoyed the interplay between the police officer and the victims, and how the victims “nevertheless brought him back and made a connection.”

Mrs. Hendrickson was struck by the erhu solo. The erhu is one of the most important Chinese instruments, according to Shen Yun’s website. It has a history of 4,000 years and can convey a wide range of emotions.

“I really enjoyed the woman playing the Chinese instrument,” she said. “It just evokes such emotion; I thought it was just beautiful.”

Tom Robinson, a management consultant and former city manager for the city of La Mirada, watched Shen Yun’s evening performance at the Terrace Theater with his wife, Priscilla.

“The dancers obviously carry a great energy and great poise as they go through their various routines,” Mr. Robinson said. He said his daughter danced for years, so he had an appreciation of the effort expended. “That was very good to see—very, very talented group of people. I found myself just sitting there and appreciating the sounds and the colors and the movements.”

Classical Chinese dance, according to Shen Yun’s website, “entails systematic training in movements and postures, as well as very difficult jumping and tumbling techniques. And so, alongside ballet, classical Chinese dance is one of the most comprehensive dance systems in the world.”

Mrs. Robinson really wished to watch Shen Yun, and her husband granted it for her birthday.

“I wanted to see this so badly,” she said. “The way they move—it’s so graceful. I felt so relaxed.”

She continued, “It is just so beautiful. You can see a difference in our American ballet and the Chinese classical dancing. It is so artistic and colorful.”