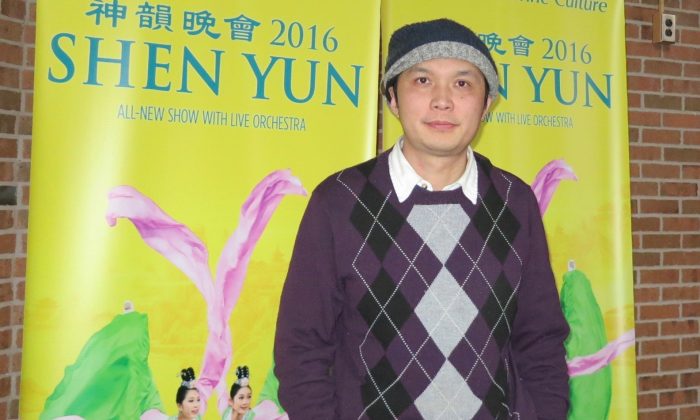 Mr. Zeng was a reporter with the state-run Guangxi TV station in China. He was familiar with the goings-on and social climate of the modern-day China, but the traditional Chinese culture was lost to him.

The New York-based Shen Yun, however, has made it its mission to revive the authentic, divinely inspired traditional Chinese culture through music and dance. Since 2006, four touring companies of equal size have traveled the world, bringing this ancient civilization to over 100 countries every year.

Still, Shen Yun has not been able to perform in China. The Jan. 30 matinee at The Oncenter Crouse Hinds Theater was Mr. Zeng’s first time seeing a Shen Yun performance.

It was incredibly emotional, Mr. Zeng said, because this is not anything he could have seen in China, and he immediately knew this was the authentic Chinese culture.

“Today, after seeing Shen Yun, I feel that the deep meaning behind the performance is just like the name Shen Yun—’the beauty of divine beings dancing’—and the performance reflects ancient traditional culture, a culture that goes way back and is passed on to us by gods,” he said.

Seeing the culture of 5,000 years was profound for Mr. Zeng, as it was for many of the audience members, he noticed. The traditional culture is filled with “profound and deep ideas” that have become a total mystery in today’s society, he said. Specifically, the core of traditional Chinese culture, the idea of harmony between heaven, earth, and humankind, is not found in China today. It is not a concept of the Western world either, he explained.

But these concepts were brought to life on stage in Shen Yun.

“I have this sensation coming out of me that I want to find my true nature. And no ordinary show is able to bring out such a feeling from people. It is very important that [Shen Yun] can give people a feeling of tranquility,” Mr. Zeng said.

He spoke of how moved he was seeing one of the classical Chinese dances, “Poets of the Orchid Pavillion.” It has been a favorite of audiences, with male dancers’ percussive use of white fans to mimic calligraphy brushes, and poetry projected onto the digital backdrop. For Mr. Zeng, it brought back the beauty of China’s famous poets with vivid imagery.

The performance also included bel canto vocalists who sing in Chinese, with the lyrics projected in both Chinese and English on the backdrop. Mr. Zeng felt a refreshing tranquility in these songs. It was like a profound realization of the purpose of life, and that it is beyond pursuing money or fame.

The China Shen Yun presents is different from the China either the Chinese or the Western world knows. Mr. Zeng said he was hopeful this would change the Western perception of China, and change China as well.

“After watching Shen Yun, I am motivated the most to save this lost traditional civilization,” he said.

The power of Shen Yun is not to be underestimated, according to Mr. Zeng.

“Shen Yun vividly portrays what the real Chinese people are —their true beauty and their true selves—and these have been lost in modern China,” he said.

Mr. Zeng explained that growing up in communist China, he was deeply affected by the atheist and materialistic culture created by the Chinese Communist Party (CCP). He says this is the perception of China the Western world has as well. The traditional culture, which believes in harmony between heaven, earth, and humankind, was nearly destroyed when communism took power.

In the absence of a traditional culture, there was globalization and the opening up to Western ideas, he explained, but through that lens of materialism and atheism, it only made people “blindly worship science.” Faith and the identity of the people were lost, and this was not a replacement.

China today, he explained with regret, is in pain. Mr. Zeng said he feels the people “have been deeply ruined” by atheism and the culture of the CCP “and they are greatly struggling in pain.” They reject their own culture and have nothing to turn to.

But there is hope in Shen Yun, which truly revives the divinely inspired culture in a way that is universally understood, judging by the audience members’ reactions.

“The performance gives me such a powerful feeling, a feeling that [Shen Yun artists] can truly understand what traditional Chinese culture is. And this performance is driven by the power of faith, more specifically power of believing in Gods, which is something that has been totally ruined by the Chinese Communist Party.”

“China can only be saved if it embraces traditional Chinese culture,” he said. “I believe Shen Yun will one day put on performances in China, and I look forward to this day to come.”