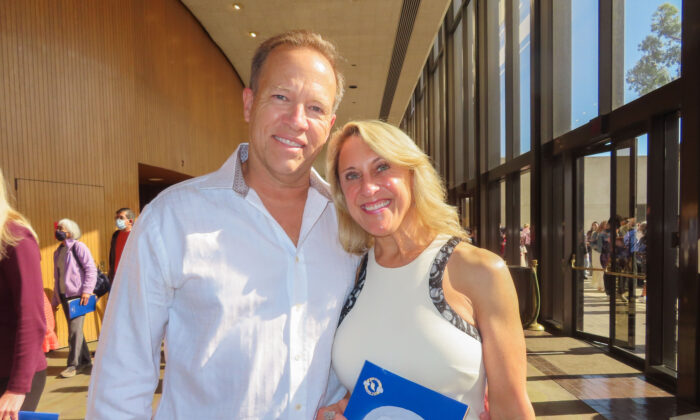 LONG BEACH, Calif.—Deanne Brown, a former professional ballet dancer, was impressed by Shen Yun Performing Arts as it performed in Long Beach, California. The combination of grace and athleticism of the performers was spectacular, she said.

Ms. Brown was attending the performance at the Terrace Theater with Richard Newton, a retired firefighter.

“To have strength is one thing, to have agility and performance quality is another. And I really think that [the dancers] combine the two quite well. The precision … you can tell they’re very well-rehearsed, they’re very precise in their movements,” Ms. Brown said.

Shen Yun presents “China before communism,” with a repertoire of story-based Chinese classical dance and music.

Ms. Brown was particularly entranced by the dance “Plum Blossom in Spring,” where the dancers portray a panoply of swirling colors as the plum blossoms herald the coming of spring.

“The plum blossom fan was exquisitely performed,” she said. Also impressive was “The Men’s Classical Chinese Dance,” where the dancers demonstrated an amazing level of athleticism, she said.

“I find it exhilarating to see the height and the power that they performed,” she said, drawing on her own background in gymnastics.

She has since moved into a very different field of work.

“I became a physical therapy assistant and pilates instructor. So, I enjoy teaching others about fitness, and health, especially [people] with orthopedic injuries,” she said.

“I would say that I’m a spiritual person, in that I believe in treating people with kindness and I think that’s why I’ve gone into a career that is of a nurturing type. I think the more people that approach society that way, the more harmony we will have as society,” she said.

Shen Yun’s dancers depict the spiritual origins of Chinese traditional culture. These teachings, based on moral and ethical self-improvement and belief in a higher being, have been the foundation of Chinese social values for centuries.

The stories portrayed the existence of a higher being but each of the dancers would have their own interpretation, Ms. Brown noted.

Mr. Newton said he found Shen Yun very visual and interesting. He bought tickets to the performance as a gift for Ms. Brown because he knew she would appreciate the experience.

“It’s very nice and it’s very precise and, again, the athleticism and skill level is very impressive,” he said. “I was very impressed by the precision [and] coordination among all the dancers. The timing was perfect.”

Segments of Shen Yun depict the persecution of the spiritual group Falun Dafa. Mr. Newton said it was good that the company was informing the public about the suppression of freedoms in China.

“We were familiar with the organ harvesting piece going on there. It’s just tragic,” Mr. Newton said, commenting on the dance that depicted the forced live organ harvesting using Falun Dafa followers as a source of organs for China’s transplantation hospitals.

After the disruptions from the COVID-19 pandemic for the last two years, many people are going out again to enjoy live entertainment.

Ms. Brown agreed. “Theater has always been a big part of my life. Growing up as a child, I went with my family. I performed professionally for 20 years. Having not attended theater for the two years during COVID, [Shen Yun] definitely makes me feel whole again.”

“And I know it was probably even harder for the performers not to have the aspect of performing then,” she said.

She had a message of encouragement for Shen Yun.

“I would say to the performers that I hope you realize all of your hard work and sacrifices pay off, not only for the audience members but for you and your current endeavors, as well as the future. It’s something that you experienced [that] I know you will take with you for a lifetime,” she said.