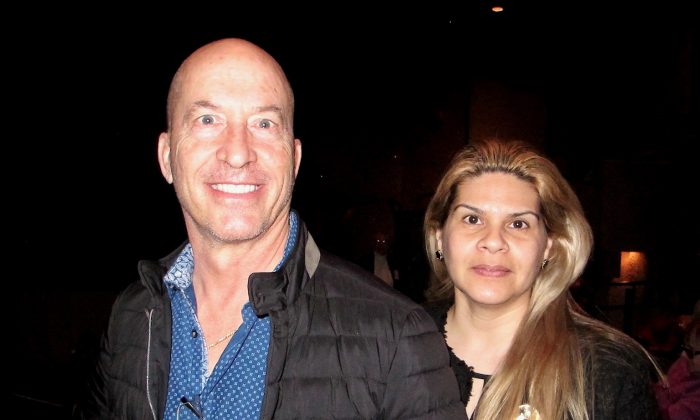 BERKELEY, Calif.—Bill Wagner was a competitive alpine skier until he was 18, after which he attended college playing university level soccer. He continued to play at a competitive level after, until he suffered a disease that made competition impossible.

So when the dancers of Shen Yun Performing Arts introduced him to the high-flying leaps and difficult tumbling techniques integral to classical Chinese dance at Zellerbach Hall on Dec. 15, Wagner was caught up in the excitement.

“It takes a lot of training and a lot of discipline, and a lot of motivation,” he explained during intermission. “It’s very fulfilling to watch it.”

“I like to see people who strive to do better all the time, and you can see that those dancers need to do that, to stay on top of their game,” Wagner said. “I’m very impressed, and it takes a lot to do what they do. … It takes the flexibility, it takes endurance, it takes coordination.”

As an athlete, he understands deeply what it means to strive for perfection, and what’s possible once you have the skill to do so.

“[The artists] have to have some cultural awareness of what they’re doing, which gives them the motivation and desire to perform well. So I really like that,” Wagner said.

Shen Yun’s mission is to revive the 5,000 years of Chinese civilization, an unbroken five-millennia of history and culture from which art forms like classical Chinese dance came about. This is a traditional culture centered around the belief of harmony between heaven, man, and earth; and so it is filled with stories that show the relationship between mankind’s culture and the divine—and the artists make these stories come alive on stage.

As such, Shen Yun is more than just beautiful athleticism if you are prepared experience more than that, according to Wagner.

Wagner is a spiritual person, he explained. Throughout his life he has been committed to serving his community, most prominently through the church as an elder and on the board of directors of a local rotary club. He understands the importance of a healthy spiritual life, and so Wagner was very glad to see, through the culture Shen Yun presented, the Chinese have such a heritage as well.

“I’m glad they are a spiritual people, and I’m sorry for the persecution that the religious people are going through [in China],” Wagner said. The Chinese Communist Party is known to be anti-religion, and many ethnic and religious minority groups are persecuted under the regime’s rule. But seeing mentions of God and spirituality in the traditional culture presented gave Wagner some hope.

Between the dance, the stories, and the unique live orchestra blending Eastern and Western sounds, Wagner felt great peace.

“I felt it brought me peace, and I was very tranquil and calm when I was watching it,” Wagner said. “I enjoyed it.”

“If you are attuned to the performance and you’re looking forward to it … you can get those things out of it,” Wagner said.

With reporting by Abraham Thompson and Catherine Yang.