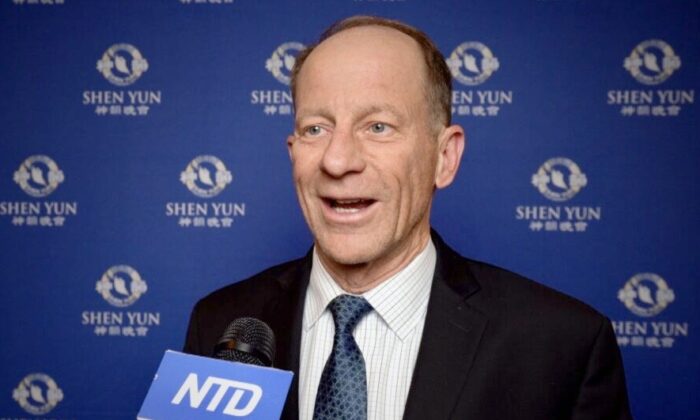 COLORADO SPRINGS, Colo.—China has been through 5,000 years of dynasties coming and going, and only in the last 100 years has the communist party of China been in power. Yet in these short 100 years, China has become nearly unrecognizable. Shen Yun Performing Arts is striving to let the world perceive the beauty that China once had.

David Stilwell was the former Assistant Secretary of State for the East Asian Pacific Bureau, at the State Department. Having lived in China for many years he expressed his appreciation for New York-based Shen Yun’s efforts to renew traditional Chinese culture.

“Last time I saw it was in Hawaii. And it just keeps getting better and better. The best thing about it is it’s doing its best to preserve Chinese traditional history, Chinese culture,” said Mr. Stilwell.

Since the Chinese Communist Party (CCP) took power, it used its authority to demand the destruction of culture.

Appreciate what you all are doing to preserve Chinese culture.
— David Stilwell

“We have a government that’s doing its best to destroy that culture. Since 1949, the Great Leap Forward, [and] the madness of the Cultural Revolution. Were it not for people like [those in Shen Yun], all those treasures would have been destroyed; all that history, all the relics would not have been around today. So again, appreciate what you all are doing to preserve Chinese culture,” he added.

Mr. Stilwell pointed out that when the communist ideology fails in China, the traditional culture that Shen Yun is reviving will be able return.

“We’ve seen with the handling of COVID, the fact that it began in China, and it was allowed to leak out of China. And now we’ve seen the madness of the zero COVID policy and how it failed miserably. Those policies and their approach to managing and governing the country don’t work. And so by preserving the culture, when this all resolves, you will have something to fall back on—something that’s traditional, solid and representative of China,” commented Mr. Stilwell.

With the atheist ideology that the CCP instilled, many Chinese people found that they were missing their spiritual side. Mr. Stilwell expressed that while in China, he and cab drivers talked about the church they attended. This indicated to Mr. Stilwell that the people in China knew that atheism wasn’t the answer.

“I was able to relate to them my own beliefs. But in the current government, you can’t talk about faith. You have to talk about the party and the party leadership, so Shen Yun preserves traditional Chinese religion, spirituality and it’s a good thing,” he said.

He added that he particularly enjoyed the music. Shen Yun‘s orchestra combines a classical Western orchestra with traditional Chinese instruments.

“I’m a music fan. And I really liked the blend of Western cellos, oboes, and bassoons with the erhu, the pipa, and the percussion. It’s a very nice combination,” said Mr. Stilwell.

“The combination of the music and the dancing was at times uplifting. My toes are tapping. But it was also very calming and soothing and relaxing. So we hit both ends of the spectrum,” expressed Mr. Stilwell.

He added that he would recommend everyone to come out and experience Shen Yun.

“When Shen Yun comes to town, I thoroughly recommend getting out and seeing it. It’s very different than what you’ve seen before, but in many ways it’s familiar. If you can see it, take the chance. Go out and be surprised,” he said.