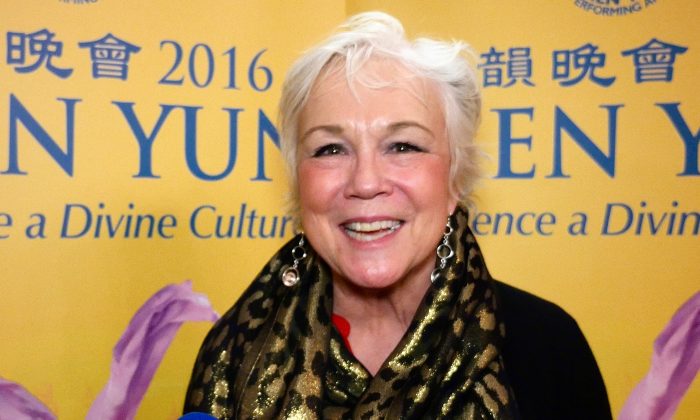 On Jan. 9, 2016, at the Academy of Music, Ms. Sparks experienced an orchestra blending East and West through Shen Yun Performing Arts. (Courtesy of NTD Television)

PHILADELPHIA—Joan Sparks is passionate about the flute. She studied music with degrees from he University of Delaware and Temple University, performed with the Philadelphia Orchestra, Delaware Symphony, and many others in the mid-Atlantic area; and formed a flute-harp duo to international acclaim.

But she has never heard the flute used to play lilting melodies evoking images of celestial fairies, alongside the Chinese pipa.

On Jan. 9 at the Academy of Music, Ms. Sparks experienced an orchestra blending East and West through Shen Yun Performing Arts.

“The music is wonderful and fresh,” said Ms. Sparks, who now runs the Flute Pro Shop in Delaware, and regularly hosts workshops for world class performers. “I love hearing the traditional Chinese instruments, and I like how they’re blended in with the orchestration of the rest of the pieces.”

She noted how the orchestra kept to certain scale patterns, and the melodies that were cohesive throughout the program. Most of the instruments were familiar, but the sound was so fresh for Western ears, she said.

New York-based Shen Yun has four touring companies the same size, each with an orchestra that harmonizes seamlessly with traditional Chinese instruments like the pipa and two-stringed erhu. And that’s not the only unique thing about the performing arts company.

Shen Yun was formed to revive traditional Chinese culture, which is 5,000 years of a divinely inspired civilization, brought back from the brink of destruction.

Ms. Sparks enjoyed the artistry of the whole performance, lauding everything from the colors to the precision to the solo bel canto vocalists.