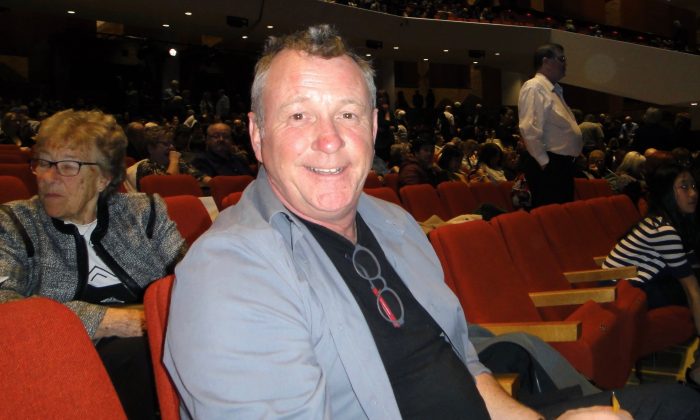 “I love it! Very colorful, a lot of movement, good dancing, and beautiful choreography,” said Graves, who was impressed by the dancers’ athleticism and artistry.

“It’s amazing what they can do,” he said.

Graves has had an impressive career doing floral arrangements for royalty, celebrities, and visiting dignitaries. He has appeared on television shows and has been teaching flower design at Humber College in Toronto for more than 20 years. He is also owner of Bloemen Décor, a Toronto-based floral design studio.

Graves said he was particularly taken in by the colors and the dancing of Shen Yun.

“The choreography is beautiful,” he said. He also had an eye for the staging, especially the digital backdrop, which interacts with the stage. “It’s well done! It’s very well done!” he said.

Established in 2006 with a mission to revive the glorious, divinely-inspired culture of China, New York-based Shen Yun is the world’s premier classical Chinese dance and music company. It features classical Chinese dance, ethnic and folk dance, an orchestra that integrates Chinese and Western instruments, as well as solo instrumental and vocal performers.

Traditional Chinese culture is filled with spiritual values, and Shen Yun brings these to the stage through a journey that passes through heavenly realms, ancient China, as well as our contemporary world.

Graves appreciated seeing this spirituality reflected in the performance. “Beautiful, beautiful!” he said.