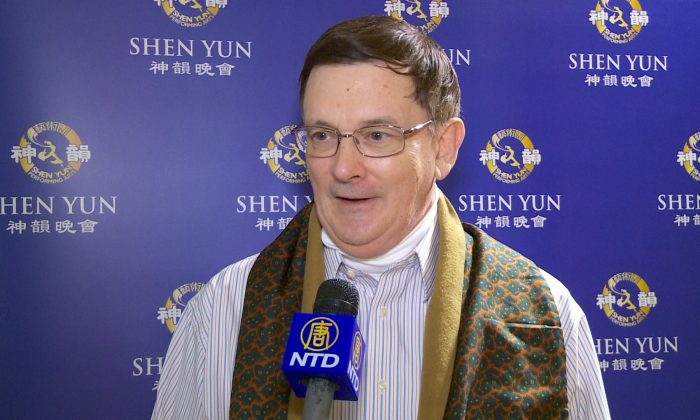 NEW YORK—Tom Weck runs three companies, and his life is a balancing act—not least because one of those companies is BOSU Fitness, which sells BOSU Balance Trainers, those half circle yoga-balls used for balance training.

And for inspiration Mr. Weck comes to see the dancers of Shen Yun Performing Arts, as he did at the David H. Koch Theater on Jan. 11, 2015.

“I love to come. This is my 6th performance I’ve come to because I love to see the exquisite balance and stability of the dancers and the poetry that they bring to their form,” Mr. Weck said.

“Everything flows, the body, the hands, the arms. It’s just a treat to be here every time,” Mr. Weck said.

Everything flows, the body, the hands, the arms. It’s just a treat to be here every time.
— Tom Weck

Mr. Weck sees Shen Yun every year and each time he studies a different movement of the dancers.

“This time I was studying the feet, because the postures, and poses, and turns, and jumps… they have to land with the feet just perfectly, and I can see how they’re doing that,” Mr. Weck said.

With Shen Yun’s mission being to revive the 5,000 years of traditional Chinese culture and Shen Yun’s dancers all train in classical Chinese dance fundamentals. This dance form, based on “profound traditional aesthetics” has itself been a way of passing down culture for thousands of years, according to Shen Yun’s program book.

“It’s a total integration of the entire body and balance and harmony and that makes it exquisite,” Mr. Weck said.

To get the full Shen Yun experience, Mr. Weck likes to get front-row tickets, and this year he was also pleasantly delighted by Shen Yun’s unique orchestra. The Shen Yun Symphony Orchestra has grown to become a brand of its own by performing individually in United States’ most prestigious theater halls.

“I was also watching the orchestra, which does not get enough credit, but they are wonderful musicians. I’m also a musician,” Mr. Weck said.

But more than just the music, Mr. Weck was impressed by the soprano soloists, especially Geng Haolan, who’s been with the company since 2009.

“She doesn’t need a microphone, she can power beautiful music naturally, which is the way they used to do it. If you couldn’t project your voice, you couldn’t sing. She was exquisite,” he said.