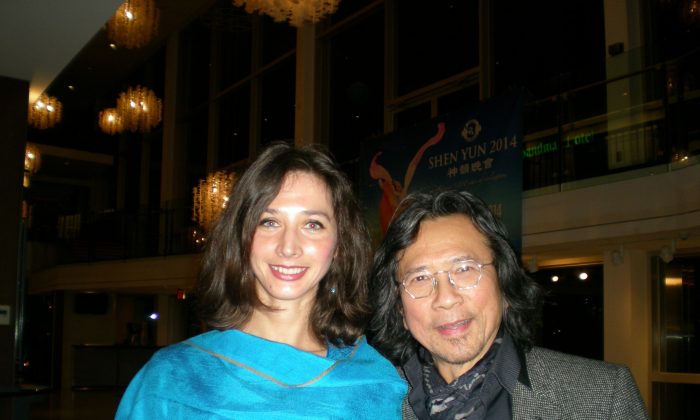 VANCOUVER—The audience was happily responsive to Shen Yun’s performance at the Queen Elizabeth Theatre on Friday evening, laughing at the funny parts and being very generous with their applause.

”It’s a very enlightening show. I think it cultivates you. It gives you a sense of wonderment,” he said.

Based in New York, Shen Yun Performing Arts was formed in 2006 by a group of Chinese artists who had the wish to revive the heart of China’s ancient culture, which was almost destroyed with the advent of communism to China, particularly the Cultural Revolution.

“To borrow the periods of China and not being in China—I think they did a marvellous job as far as that’s concerned,” said Mr. Bong.

Mr. Bong is a self-described artist, student, and writer in practical spirituality who regularly exhibits his work at various venues in Vancouver. He attended Shen Yun with his manager Yuliana Sirman, a legal assistant.

“It was my first time and I really liked it,” Ms. Sirman said. “It’s very graceful. The movements and the music are very tasteful and classy. Very cultural—it’s very saturated culturally I would say.”

They were both delighted with the orchestra and its unique combination of Chinese and Western instruments, expressing “the grandeur of a Western orchestra and the distinct sensibilities of China’s 5,000-year-old civilization,” according to the Shen Yun website.

“They smile, they all smile,” added Ms. Sirman. “Normally you would see orchestra people and they’re very serious and sober but they were so happy to see us and were waving at us.”

Mr. Bong said he could sense an energy in the music, and also in the dancers.

“The energy of a person is very important. If they walk in the room, some energy repels you, some energy rejects you. For [the dancers], there isn’t any kind of thing they hold back about the spiritual essence that is behind the energy. And that lends itself to the movement of dance, how they move, everything.”

Shen Yun stages mainly classical Chinese dance, an art form passed down and enriched over thousands of years in the Middle Kingdom, dynasty after dynasty.

Ms. Sirman said she would describe the show as “colourful and happy, and educational.”