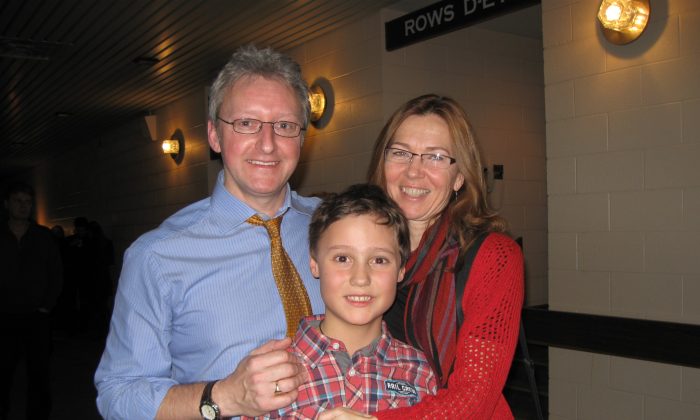 The Griffiths-Fulton family, parents Karl and Lynne and their son, Tegan, took in Shen Yun's Wednesday night performance at Centre In The Square theatre in Kitchener on Jan. 14, 2014. (Allen Zhou/Epoch Times)

KITCHENER-WATERLOO, Canada—Shen Yun Performing Arts opened a new world of artistry and philosophy to fine art photographer and teacher Karl Griffiths-Fulton at the Centre In The Square theatre Wednesday night.

“It’s good, I know very little about Chinese art, a little bit about the music. This is all new to me,” he said.

Mr. Griffiths-Fulton is an accomplished artist with clients that include Royal Bank of Canada, Gardening Life Magazine, and MTV Europe.

His fine art photography has been exhibited widely in the U.K., Ireland, Canada, and Russia, and he has published several books of art photography. He also teaches the philosophy of art at the University of Waterloo.

He said he appreciated the classical Chinese dance and music production that New York-based Shen Yun put on stage that evening. And as a veteran fine art photographer, he particularly praised the striking visuals appearing on the state-of-the-art digital backdrops.

That background is Shen Yun’s vividly animated digital projection, a living scene that extends the range of the stage to bygone eras and heavenly realms, as described on the Shen Yun website.

Sometimes the scenes on the backdrop interact with the dancers on the stage, something Mr. Fulton said he enjoyed.

“Visually, everything is working really, well, its so slick, very professional,” he said.

“Amazing, especially the young women keeping together in time. They just flew across the stage. It looks like they are floating on air,” he added, commending the synchronicity and gracefulness of the female dancers in their large-scale dance pieces.

Speaking during intermission, with half of the show before him, Mr. Griffiths-Fulton noted Mongolian Chopsticks as a highlight so far. In this Mongolian dance, men relax with a bowl of wine before performing a traditional chopstick dance.

“It’s really easy to get into,” he said of Shen Yun.

His wife, Lynne, said she also enjoyed the show.

“It’s very, very good. It’s lovely. The costumes are beautiful and the dances are very peaceful,” she said.

“I really do like it and the martial arts. I found that quite interesting,” he said.

With reporting by Allen Zhou.