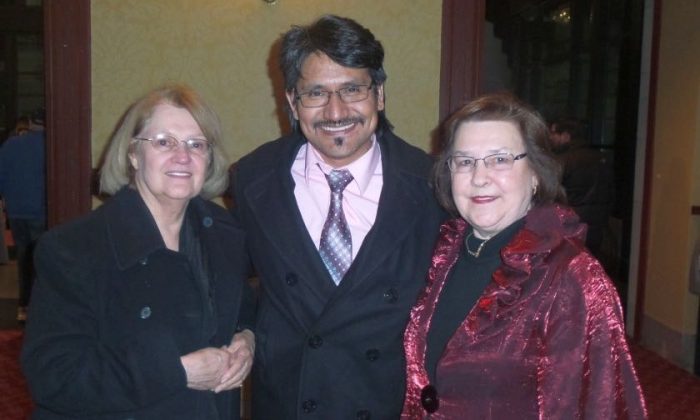 RALEIGH, N.C.—Yvonne Pagan, Jeanette Serens, and Alex Murillo are on multicultural committees in the Wilmington, N.C. area. They drove 3 hours to watch the Shen Yun Performing Arts at the Duke Energy Center for the Performing Arts in Raleigh on Jan. 28.

Their main purpose was to bring back culture and arts to their community. After watching Shen Yun, they found everything they expected, and even more.

Ms. Pagan said the performance was “out of this world, like nothing I have seen before.”

“It was spectacular, the precision … the special effects were absolutely incredible. The quality of the performance, [it was] so artistic. The costumes…are absolutely beautiful,” she said.

Mr. Murillo, who is on the multicultural committee for the Shallotte Festival in Shallotte, N.C. was also impressed.

“The music is excellent, everything is so precise,” he said.

Ms. Serens, who co-chairs the multicultural committee for the Azalea Festival in Wilmington, N.C. with Ms. Pagan, was moved to tears by the stories portrayed in the Shen Yun performance.

“The stories that these movement gave to us about the culture, the love of life, and the divine … It was so heart warming. I really had tears in my eyes,” she said.

Ms. Pagan said it was significant for them to be at the performance, since because of their positions, they spend their time all year immersing themselves in the arts and culture and bring what they find back to their communities.

“It was important for us to be here today, to bring back culture to our area, to celebrate the diversity,” she said.

What they found was traditional Chinese culture brought to life on stage in a magnificent grand production. Shen Yun’s grand mission is to revive 5,000 years of traditional Chinese culture and present it live on stage for audiences around the world to experience. Through classical Chinese dance, a unique live orchestra that combines classical Western instruments with ancient Chinese instruments, gorgeous costumes, and state-of-the art animated backdrops Shen Yun brings a moving, unforgettable experience to the audience.

Ms. Serens said, “It was very, very heart moving … you can feel it, you can just sense it.”

“We hope they will keep doing this for many years,” she said.

All three expressed their wish that Shen Yun may one day come to the Wilmington, N.C. area and bring traditional Chinese culture there as well for audiences to experience.