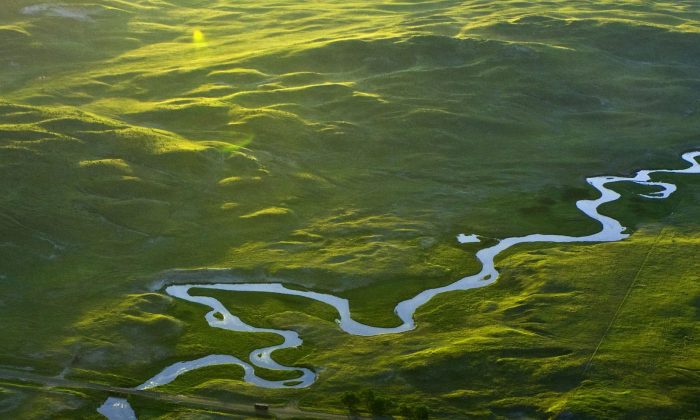 Nature's beauty is on clear display in the sweeping dunes of the Sandhills. (Courtesy of Nebraska Tourism)
Destinations

Finding Serenity in the Nebraska Sandhills

BURWELL, Neb.—When the wind blows, the Nebraska Sandhills turn into an emerald sea.

Vivid green in late spring, their gently undulating peaks and valleys extend as far as the eye can see, and the tall grasses that cover them sway in great, shimmering waves that slowly sweep across and up the hillsides in a way that reminds me of a rippling sheet of satin. There’s a grand majesty to the movements—nature’s choreography at work.

I’ve never seen anything like it, and I am mesmerized.

That could have something to do with having grown up in drought-ridden southern California, where hills were more often short-haired and splotched with bald spots and rocks, or with now living in New York City, surrounded by gray skyscrapers that punctuate the horizon and crowd the skies.

The Nebraska Sandhills are a precious anomaly: one of the last large, untouched vestiges of the Great Plains.

Designated a National Natural Landmark in 1984, the Sandhills are the largest sand dune system in the Western Hemisphere, and one of the largest grass-stabilized dune regions in the world. The rolling, prairie-covered hills blanket about a fourth of the state, stretching nearly 20,000 square miles across its central and western regions. They rest atop the extensive Ogallala Aquifer, which seeps above ground into thousands of shallow lakes and wetlands in lower-lying valleys.

Dunes can stand close to 400 feet tall and extend as far as 20 miles—decisively upending the popular misconception that Nebraska is all flat.

Here’s another superlative to add to the region’s repertoire: it’s the best preserved ecoregion in the Great Plains. As much as 85 percent of the Sandhills is intact natural habitat, largely because most of the land has never been plowed. The sandy soil proved unsuitable for farming, so early settlers adapted by turning to cattle ranching instead. Black bovines and copper horses now roam the verdant hills.

Much of the Sandhills is privately owned ranchland, limiting visitors to scenic drives down public roads. Watching the endless green roll by through a car window is a pleasure in its own right—hypnotizing, almost—but more ranchers are now opening up their lands to tourism, allowing visitors to experience the beauty of the dunes close up.

Switzer Ranch, just outside of Burwell, started incorporating ecotourism into their business in 2001. The family cattle ranch has been running since 1904, when owner Sue Ann Switzer’s grandfather and great-uncle acquired a plot of land via the Kinkaid Act. The act granted 640 acres of public land to settlers in western Nebraska for free, an expansion of the acreage alloted by the 1862 Homestead Act, to account for the larger amount of land needed for grazing cattle.

Today, the working ranch remains largely the same as it was over 100 years ago. Through Calamus Outfitters, their tourism-targeted addition, they offer lodging, trips on the Calamus River, bird-watching, and ranch habitat ecotours of their property.

Sarah Sortum, Sue Ann Switzer’s daughter, rounds my fellow travelers and me into an open-top Jeep for a tour. Sortum grew up on the ranch and left it briefly before returning with her husband. “I wanted to raise my kids here,” she said.

As we cruise over the dunes, she gives us a taste of the prairie’s incredible diversity. We learn to look more closely at the ground.

Amidst an abundance of curving, feathery bluegrass, she picks out needle-and-thread grass, tall and sleek, so named for the hidden, pointed tips at the bottom ends of their leaves that harden and stick into the ground like spears when they fall. She gives me a piece of its stem to nibble. It breaks fresh and sweet in my mouth, like the aftertaste of strawberries. (Lucky cattle, I think.)

Spiderwort, meanwhile, tastes vaguely like green onion. It goes down slippery like okra—the stem encases a gooey substance that has earned the plant the nickname of “cow slobber.”

We trace an earthy fragrance we pick up in whiffs to sage, which the Pawnee tribe, the first Native Americans in Nebraska, would burn for spiritual ceremonies. There’s also soapweed yucca, with fibrous leaves they weaved into baskets and sandals and saponin-rich roots they lathered into soap.

At the top of a dune, we stop to take in the views—uninterrupted green, laid wide open under an azure sky. When the rumbling engine of the Jeep shuts off, we’re plunged into profound silence, broken only by lilting birdsong. We listen.

Sortum names the birds as they sound: the insect-like trill of the grasshopper sparrow; the rhythmic “cheep, cheep-cheep” of the dickcissel; the solitary whistle of a bobwhite quail. Their calls intertwine against an incessant backdrop of chirping crickets and rustling grass.

It’s still, but not quite—the grasses dance in the wind. It’s quiet, but not entirely—nature’s music permeates the air.

A gem of unspoiled, pastoral beauty, the Sandhills are a reminder of the treasures that lie in parts of the country often overlooked or unexplored. It’s a happy discovery, for the senses and the soul.

“This is my stress reliever,” Sortum says. “If I get stressed, I come out to the hills. It’s good for you.”

Nebraska is intersected by nearly 80,000 miles of rivers, offering plenty of natural beauty and water recreation. The slow-flowing Niobrara National Scenic River, which winds 76 miles from the city of Valentine through northern Nebraska’s breathtaking Sandhills scenery, is especially popular for outdoor getaways.

Choose any of the several outfitters stationed along the shores as your starting point and spend a few leisurely hours canoeing, kayaking, or tubing down the river. If you’re looking for something new, try tanking—the uniquely Nebraskan activity of slowly drifting downstream in a repurposed horse or livestock feeding tank (essentially a giant plastic or metal tub rigged with seating), with only the current and a (minimally useful) wooden paddle to guide you.

Locals make a day out of it, stocking their tubes and tanks with coolers of beer and sandwiches. (Do note that an initial five-mile stretch of river runs through the Fort Niobrara National Wildlife Refuge and prohibits alcohol use; floaters thus often opt to start at outfitters located past the refuge.) Be sure to reserve time for detours to explore stops along the river, like the stunning Smith Falls State Park, home to Nebraska’s tallest waterfall at 63 feet.

Base yourself at the family-friendly Niobrara Lodge, in Valentine, and when hunger strikes after a long day on the river, head to Peppermill & E.K. Valentine Lounge, a local favorite less than 10 minutes away by foot, for excellent local Nebraska beef steaks.

Roam With The Bison

The Sandhills’ diverse grasslands are home to an equally diverse range of wildlife. Visit Fort Niobrara National Wildlife Refuge, which spans over 19,000 acres along the scenic Niobrara River, at the convergence of six different plant communities, for a taste of that diversity. About 350 bison, once nearly extinct due to hunting and habitat loss, roam the former frontier military fort, along with herds of elk and other prairie mammals and birds.

To get up close and personal with the bison, head to Comstock Premier Lodge Bed and Breakfast in Sargent, where owners Mitch and Roxanne Huggins maintain an incredibly diverse herd: beautiful white-, golden-, and black-coated ones graze among the usual chocolate-brown. Though the property is primarily a hunting lodge, guests can also take ATV tours of the surrounding 3,000-acre ranch, to spot bison, elk, bighorn cross sheep, and even aoudad. A bison tour takes you right into the midst of the creatures, who, accustomed to human presence (the owners will go sit among them for hours after a long day), may approach to sniff around, gaze at you with their big, sweet eyes, and lick your fingers through open windows with rough, curling tongues.

Back at the lodge, cozy up in front of the fireplace or head to the deck to take in the stunning vistas. The building is perched on a hill surrounded by nothing but hills and trees in a hundred shades of green, dotted with roaming bison for as far as the eye can see.

At the Prairie Club, located on the rim of the Snake River Canyon, the world-class golf takes advantage of nature’s work—the rolling, grass-covered terrain of the Sandhills sets the perfect scene. The destination golf resort’s three unique courses have been ranked among the top 100 in America, with the Dunes Course taking No. 35 on Golf Digest’s Greatest Public Course in America in 2015, and the Horse Course taking its No. 10 Most Fun Course You Can Play in America in 2012. Meanwhile, fine dining at the lodge is local and delicious, and Stay & Play packages offer overnight lodging with incredible canyon views and starry night skies.

This trip was organized by Nebraska Tourism.