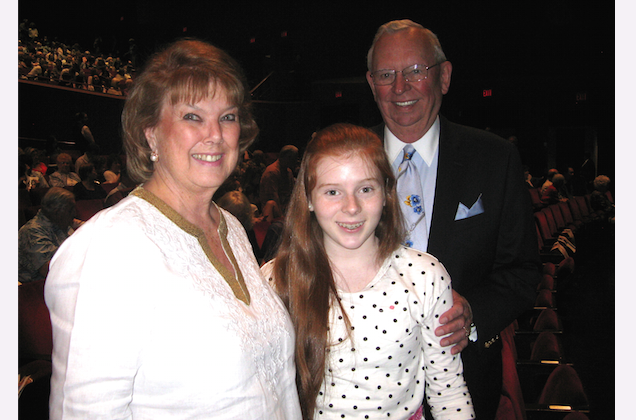 Sandra and Robert Graves with their goddaughter, Grace, enjoy Shen Yun Performing Arts at the Segerstrom Center for the Arts, on March 16. (Albert Roman /Epoch Times)

COSTA MESA, Calif.—Shen Yun Performing Arts New York Company brought joy and enlightenment to the Graves family at Segerstrom Center for the Arts on a beautiful Sunday afternoon on March 16.

Robert Graves the owner of Graves Financial Wealth Management. He earned recognition as a top financial advisor by being named to the LPL Financial Chairman’s Council (2011–2012, an award based on revenues.) Mr. Graves is also the author of Your Life Plan: A Guide to Financial Freedom.

Mr. Graves and his wife, Sandra, took their goddaughter, Grace, to see another sold-out performance of the world-renowned Shen Yun. Mrs. Graves explained that they “have tried to introduce her to some of life’s finer things.”

New York-based Shen Yun is an independent, non-profit organization that has quickly become an international phenomenon.

“In 2006, a group of leading classical Chinese artists came together in New York with one wish: to revive the true, divinely inspired culture of China and share it with the world,” according to the Shen Yun website. “Through the universal language of music and dance, Shen Yun weaves a wondrous tapestry of heavenly realms, ancient legends, and modern heroic tales, taking you on a journey through 5,000 years of Chinese culture.”

Mr. Graves was taken by the spirituality inherent in the lyrics sung by Shen Yun soloists. “The song that was sung, that was of the divine. And at the end of it, when it says ‘Hurry and seek the truth, for this is your life’s true purpose,’ that was beautiful.”

He was referring to the vocal music piece entitled “The True Purpose of Life.”

Mrs. Graves said, “I like the one with the mother and daughter with the truth, compassion, and tolerance. That meant a lot to me. Resonated with me.”

She was referring to the dance piece The Steadfast Lotus, which depicts the ongoing persecution of people who practice Falun Dafa, a spiritual meditation discipline based on truthfulness, compassion, and tolerance. The persecution was instigated by the Chinese communist regime in 1999 and continues to this day. Mrs. Graves said she felt sorrow and was outraged by it.

The classical Chinese dance impressed the family. “It was fantastic. It’s a wonderful show and the dancing and the twirls and the jumping,” said Mr. Graves. “It’s just something you have to see.”

As a dancer and singer member of the Crescendo Performing Arts Academy, Grace said, “I think it was fantastic. And I think the dancing and the costuming is just wonderful and magnificent. I think it’s really fun to see. I think everybody should see this.”

“It’s different from the dance that they have today, it’s more special,” she said. “It’s by itself, alone, it’s something that creates a whole different world.”

At the core of a Shen Yun performance is Chinese dance, which is “known for its incredible flips and spins, and its gentle elegance, it is one of the most rigorous and expressive art forms in the world,” according to the website.

Mr. Graves was fascinated by the dance technique. He liked all the dance pieces, and described a few, “The one that was [The] Steadfast Lotus, that was special. I think, all the discipline that they have, of the movement, with the scarves and their flowers in their hands, and how they move that. And they’re so in sync with one another.”

He continued, “The one with the sleeves, the dance with the sleeves, that was beautiful,” and “The Mongolian Chopsticks was very, very interesting. But there were other ones, where the dances were so smooth, and the rhythm is just perfect. And when they walk, when they go fast across the stage, there is not a movement above the shoulders. It’s just beautiful.”

“That was beautiful!” Mrs. Graves chimed in.

Mr. Graves still had more pieces to talk about. “The one kid that was trying to be educated, he’s supposed to read and he hits the beehive. Little humor,” he said.

The precision of the dancers enthralled Mr. Graves: “And never once did you see one of them bump into another. With all that movement and all that twirling, just so graceful.”

The music and the Shen Yun Orchestra delighted Mrs. Graves. She said, “Another thing that was really good was the orchestra. I’m really enjoying the music. Different instruments that I’ve never even heard of before. But mixing in with the Western music is really interesting, and it’s a beautiful sound.”

According to the website, “The Shen Yun Orchestra masterfully blends two of the world’s greatest classical music traditions. Ancient Chinese instruments such as the soul-stirring erhu and the delicate pipa lead the melody on top of a full orchestra of Western strings, percussion, woodwinds, and brass. The Western orchestra with its energy and grandeur, and the Chinese instruments with their distinct tones and styles, create a dramatic new sound.”

Mr. Graves said he appreciated the two Chinese and English-speaking emcees who introduced the background and context of each piece for better understanding. He also credited the program book, “the program, where you can read about it ahead of time. And then see it performed on the stage gives you a lot more. You get a lot more from it, more education.”

“That was something. You have to come see it,” said Mr. Graves of the performance overall. “It’s just beautiful.”