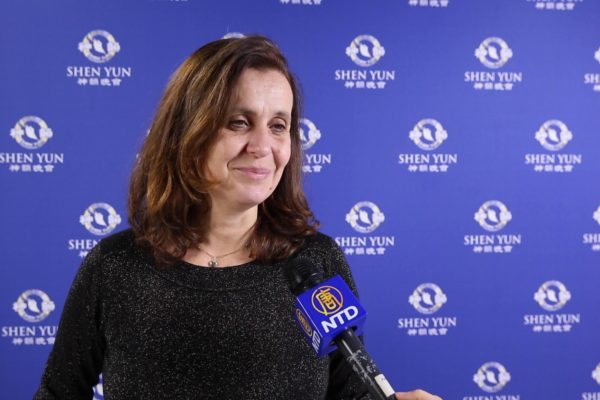 Filmmaker Pascale Pouzadoux was among the audience for the second performance of Shen Yun Performing Arts company in Paris on Jan. 17, 2019. (NTD Television)

PARIS—Shen Yun Performing Arts received a warm welcome from an enthusiastic audience at the Palais des Congrès for its second performance of the season in France.

On Jan. 17, the premier classical Chinese dance and music company returned to the delight of a large audience excited to discover the treasures of 5,000 years of traditional Chinese culture.

Among them was Pascale Pouzadoux, an actress and filmmaker and partner of actor Antoine Duléry, who gave her first impressions of Shen Yun after the performance.

“I think the dancers are extremely dynamic and beautiful. As for the stage backdrop, they are magnificent. Not to mention the colors and the costumes!” she said.

Pouzadoux was invited by her friend, actress Marthe Villalonga, whom she directed in the film ” La dernière leçon.”

“There is both humor and beauty,” added the director of “L’autre côté du lit,” an incredible comedy featuring Sophie Marceau and Danny Boon.

While reviving the traditional Chinese culture where 5,000 years of history include Buddhist legends, Taoist myths, and vibrant dynasties that happily intermingle on stage, Shen Yun also invites the audience to “discover China differently, by presenting its wonderful and ancestral side,” the filmmaker said.

“I think it’s wonderful, I think it makes us dream, it allows us to get to know a culture that we don’t know enough,” says the winner for best short film at the Alpe d’Huez festival in 1999.

The director was dazzled by the dancers’ extraordinary technique and the orchestra’s virtuosity, but she was also struck by the performers’ attitude, who seemed to be “inspired by something very ancient.”

“They were trying to communicate to us a form of serenity, tranquility, a meditation on life and existence,” the filmmaker said.

In addition to the rigorous training back in Shen Yun’s New York headquarters, the company members draw their inspiration from spiritual meditation practice, Falun Gong. It is based on ancient Chinese teachings: a traditional method of cultivating the body and mind that allows them to elevate their moral qualities.

Focused on truthfulness, compassion, and tolerance, the practice of Falun Gong gives Shen Yun performers the opportunity to transcend themselves and offer their audience a show whose quality goes well beyond the purely technical aspect of their profession, as they explain in the orogram.

“The whole world should see this show,” said Pouzadoux.