Filmmaker Feels Like a Weight Was Lifted After Seeing Shen Yun 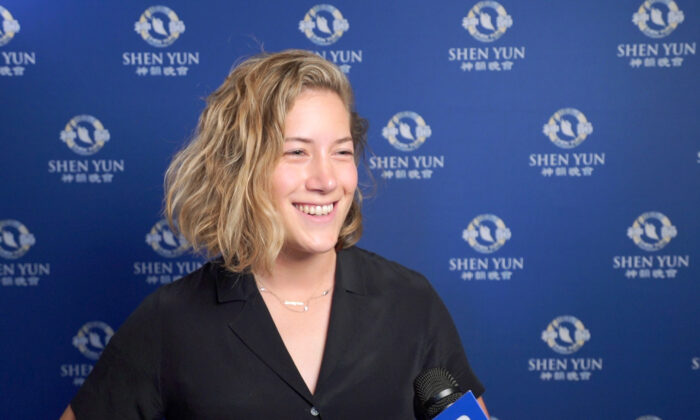 SAN FRANCISCO—Documentary maker Nicole Zak had seen Shen Yun billboards many times while commuting to work, and she wanted to understand what Shen Yun Performing Arts was about. She attended the performance in San Francisco on Jan. 4, 2020.

“I came here and then I watched it, and I kid you not, I’m sincere and earnest when I say that I walked out feeling like a weight lifted a little bit, and like I want to explore it more. I did not expect it from this show, but I’m walking away from this show like that,” she said at the War Memorial Opera House.

Based in New York, Shen Yun is the world’s premier classical Chinese dance and music company. Its mission is to bring China’s ancient culture to life for today’s audiences.

Shen Yun’s website explains that traditional Chinese culture had a strong emphasis on spirituality, including moral values such as faith in the divine and harmony with nature. Shen Yun aims to revive this culture, which has been nearly lost under today’s Chinese communist regime.

Zak believes Shen Yun’s mission is important. As a filmmaker, Zak focuses on people, groups, and communities, and she thinks she has gotten inspiration from Shen Yun for her filmmaking.

Shen Yun’s website states: “There’s something that unites Shen Yun artists beyond performing arts. These artists are also spiritual seekers on a shared journey. … Their self-discipline is remarkable, and they believe that cultivating the heart is the way to create art that is beautifully sublime.”

This year, two of the short dance pieces in Shen Yun depict how the peaceful spiritual practice Falun Dafa is being unjustly persecuted in China. Falun Dafa includes meditative exercises and moral teachings based on truthfulness, compassion, and tolerance. Zak was interested in learning more about it.

“Leaving this performance, I feel extremely peaceful. I feel healed to an extent, to an extent in which I want to explore the practice further, because if you can just walk out of a theater feeling this way, what can you do when you actually participate in the practice?” Zak said.

She felt that Shen Yun gave her “a lot to think on and a lot to chew on, mentally and spiritually.”

Because Shen Yun aims to revive the culture that the communist regime is trying to destroy, and because some of the dance pieces depict the regime’s persecution of people for their faith, Shen Yun cannot perform in China today for fear of persecution.