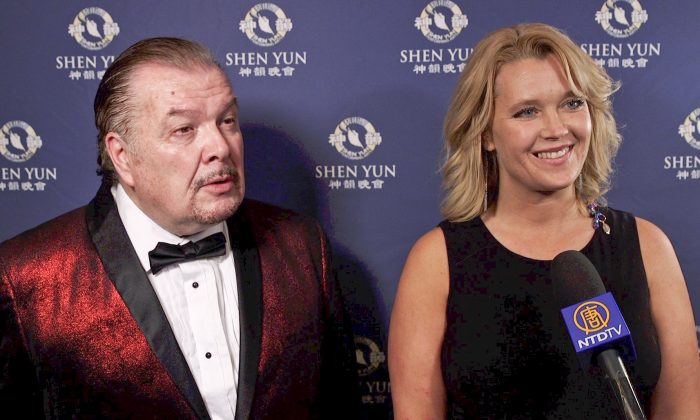 Kevin Cooper and Cristen Colleen enjoyed the Shen Yun performance at the Detroit Opera House. "Although I see the Chinese culture as very beautiful, not everything was beautiful, and there was an honest truth to that, but there was also triumph, and togetherness, a unity, to fight together for what was righteous, for what was dignified, and what was godly, so a togetherness and a unity to fight through any challenge," said Ms. Colleen of her second time seeing Shen Yun. (NTD Television)

“I love it, because the color, the [tumbling], I mean, the photography, everything, it was amazing, I’ve never seen anything like it. I’m very supportive of it.”

“I think what really hit me home was the [dance about] persecution, and the reason to fight, to believe in something, I thought that was really good. I think that when people believe in themselves and believe in something, especially in God, that’s very admirable, and they express who they feel they are and pretty much are a lot of examples that, I think, that can help others—I think the show in general shows that.”

“I’m 100 percent in that. I believe in God, believe in everything the bible stands for, and I’m very supportive of anybody that would try to get people to see that that’s all they have. This world can be very wicked, and the fact that you have faith and something to believe in, that basically means a lot.”