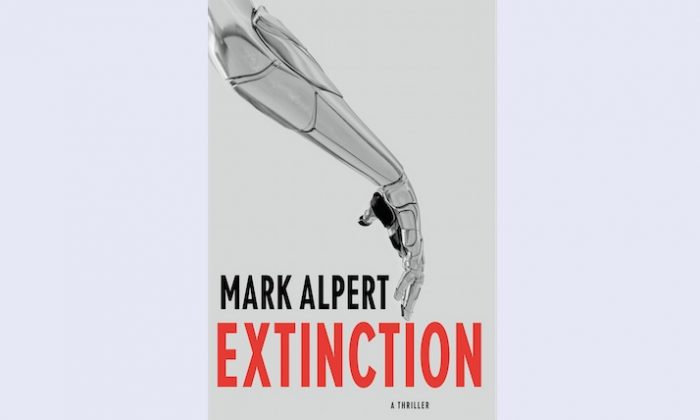 The cover of "Extinction" by Mark Alpert. (Courtesy of the author)
Arts & Culture

Mark Alpert, a novelist of science fiction thrillers, was looking for a story plot a few years ago that would involve artificial intelligence, mass surveillance, dangerous cyborgs, and cybernetic eyesight. “Some merger of man and machine,” he mused. So why not craft a story where people are lobotomized, plugged into a computer network, and made to watch surveillance videos around the clock?

An incredible plot line, to be sure—especially when a semblance of believability is crucial for science fiction thrillers. “Readers want to think that the plots can actually happen,” Alpert said in an interview. “That’s why thriller writers spend so much time doing research about spy agencies and police procedures. And weaponry.”

So is it believable that a government would actually do something like that?

Well, to be fair, the Chinese Communist Party does not really do that—but Alpert was reading about somewhat related activities, and his own imagination took it from there. “This was 2009. I had already read about the harvesting of organs from condemned Chinese prisoners. It was common knowledge, if you read Epoch Times, if you read The New York Times, that this was going on.”

His new novel, Extinction, published last year, is based on the Chinese regime’s frenetic ramping up of surveillance efforts, ostensibly to control crime (but in fact to monitor dissidents), and the concurrent need to process all the footage.

The Chinese Communist Party’s “creepy” penchant, Alpert said, to control what its people think also came to play a part in his story. “It came together in my head: this idea of a man-machine network, Supreme Harmony.”

The idea of a “harmonious society” was the catchphrase of the communist regime under Party leader Hu Jintao, who handed the reigns to Xi Jinping in November 2012. Alpert saw the pieces coming together. “Supreme harmony was the ultimate expression of this, it’s valuing harmony over individual freedom. That’s what it represents: all one consciousness. Absolutely no individual freedom.”

It would consist of slicing out the thalamus (part of its function is to regulate breathing, consciousness and relaying motor signals to the cerebral cortex) , above the brainstem, of political dissenters and plugging them into the computer network. They would monitor the footage collected from flying cyborg insects. By the end of the novel, however, the lobotomized prisoners form their own consciousness and turn on their creators.

Predictably, there will be no mainland Chinese version of the novel. But Alpert was surprised that even some Americans were not quite sold on the idea that the Chinese Communist Party was the sort of government that could plausibly, even in the realm of sci-fi thrillers, initiate such a program.

“‘Gee, that sounds rather fantastical,'” Alpert recalls one reader telling him at a book-signing event in north Michigan. “But I’d say, ‘well, actually, something similar has happened with organ harvesting.’ People were very surprised by this. They said: ‘Really? They condemn prisoners and harvest their organs? That’s incredibly creepy. I thought that was all rumors.'”

Though the Chinese regime’s harvesting of organs from prisoners of conscience is not quite yet at the level of mainstream knowledge, there appears to be a generally expanding understanding of the practice, as evidenced by congressional hearings, books, studies, and award-winning reportage over the last few years.

Although Extinction will not be published in China, Alpert just so happens to be a bestselling author in the nearby island of Taiwan, which is a democracy. “The Mandarin translation of my first novel, Final Theory, sold more than 50,000 copies there,” he wrote in a blog post on the website Killzone Authors last year.

He continued: “I can make this sound even more impressive by noting that Taiwan has only 23 million people, or about 7.5 percent of the U.S. population. Using some creative math, I estimate that my sales in Taiwan are the equivalent of selling more than 650,000 books in this country. Move over, Grisham!”

Extinction appears to have been well received by readers in Taiwan so far. A reviewer calling himself “Dollergy” wrote on the popular website books.com.tw: “It was invented in China. Originally the Supreme Harmony system was used to control dissidents, like Xinjiang Independence people and so forth. It was described so brilliantly. It made me think of Asimov’s ‘Foundation Series.'”

Another reviewer, “No Dust,” wrote: “The author of Extinction refers to the arrest of dissidents and the surveillance system in Chongqing, China, adds some creative imagination, and combines it with a realistic high-tech future. It makes you worried that the future will really turn out like the novel says.”