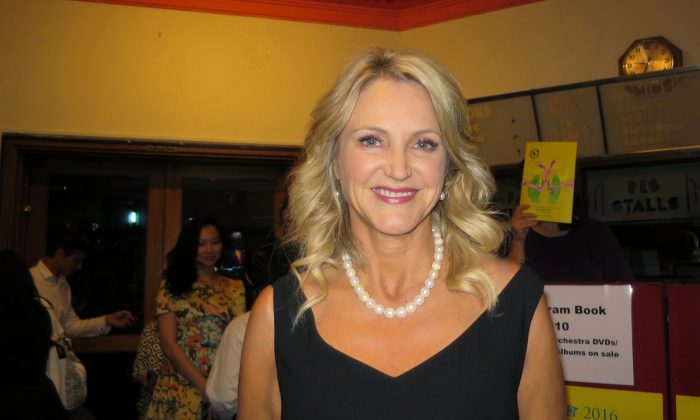 PERTH, Australia—Shen Yun Performing Arts brought a ray of sunshine at the end of a grey and dreary rain-filled day when the artists performed to a full house at the Regal Theatre on Jan. 30.

The Honorable Melissa Parke, Federal Member for Fremantle, appreciated the vibrant colours and the quality of the performance.

“It was an absolutely spectacular performance of the highest standard of dance,” she said. “Just love the colours of the beautiful costumes, and all of the ribbons, and the twirling, and the jumps. It was so spectacular.”

Based in New York, Shen Yun has classical Chinese dance at its heart, but also incorporates folk and ethnic dance. Classical Chinese dance, passed down through the imperial courts for thousands of years, is a complete system of dance embodying traditional aesthetic principles with its unique dance movements, rhythms, and inner meaning, paying particular attention to each movement, hand gesture, and facial expression.

The Shen Yun website states, “Through expression of bearing and form, beautiful dance movements bring out the inner meaning of intrinsic thoughts and feelings, reflecting the peculiarities of human nature, the standard for human conduct, moral concepts, mental state, one’s value system, and so on.”

Ms. Parke noticed and appreciated the dancers‘ attention to detail as individuals, but also the complete visual picture they presented on stage dancing as a whole.

“I think it was the professionalism, the energy, the delight on the faces of the dancers, and the beautiful costumes. And when they all move together,” she said. “I think the dancing and the beautiful performances are very, very uplifting for the soul. It just left you feeling happy and serene, but also uplifting.”

Shen Yun uses mini-dramas to give a glimpse of 5,000 years of Chinese history and culture. Ms. Parke appreciated this aspect and thought it valuable for all Australians.

“Learning about some of the ancient Chinese culture is really important,” she said. “It does add to the other dimension of the Australia-China relationship to be able to see some of the culture and dancing that we may not otherwise be able to see. I think that’s really beneficial.”

“I think what’s most important is about developing of people-to-people relationships, and understanding of the culture. Not just the political and business relationships. [Shen Yun] is perfect for that!”

She wanted to thank Shen Yun for coming to Perth and encouraged everyone to take this rare opportunity to attend.

“You have to see this, you won’t see this anywhere else. It’s the most beautiful performance,” she said.