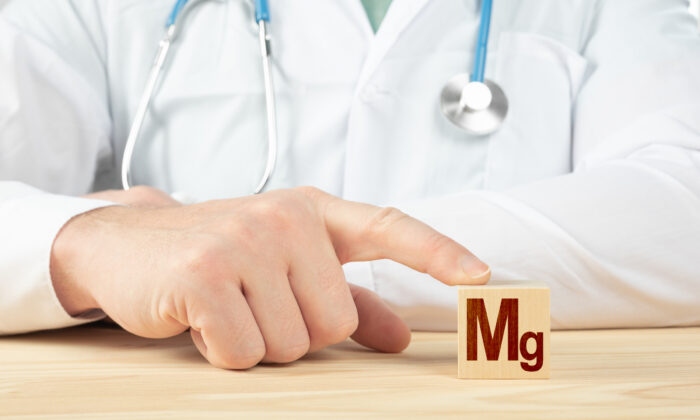 The FDA has given the nod to add a qualified health claim to magnesium for its role in modulating high blood pressure.

Guy Johnson, Ph.D., principal at Johnson Nutrition Solutions LLC, filed a petition with the FDA in 2016 on behalf of The Center for Magnesium Education and Research, requesting the FDA to issue a qualified health claim for conventional foods and dietary supplements that contain 20% of the daily value of magnesium.

Based on hundreds of studies and papers, he proposed that magnesium could reduce the risk of high blood pressure and that he should be allowed to state that fact on certain foods and dietary supplements. Six years later, in January 2022, the FDA responded. In a press release, the FDA said:

“… it does not intend to object to the use of certain qualified health claims regarding the consumption of magnesium and a reduced risk of high blood pressure (hypertension), provided that the claims are appropriately worded to avoid misleading consumers and other factors for the use of the claim are met.”

Magnesium is the fourth most abundant element in your body and one of the seven essential minerals we cannot live without. It is involved in hundreds of biochemical reactions in the body, and deficiency can contribute to significant health problems. It is necessary for the healthy functioning of most cells, and especially your heart and muscles.

Low levels can impede cellular metabolic function and mitochondrial function. According to one scientific review, which included studies dating as far back as 1937, low magnesium appears to be the greatest predictor of heart disease. Research published in 2017 shows even subclinical magnesium deficiency can compromise cardiovascular health.

Magnesium is a necessary component for the activation of vitamin D and deficiency can hamper your ability to convert vitamin D from sun exposure or oral supplements. Despite hundreds of published studies showing a clear correlation between magnesium and high blood pressure, the FDA’s response to the petition, while likely expected, was disappointing.

Johnson’s petition proposed that a qualified health claim could be made for conventional foods and dietary supplements indicating that magnesium plays a significant role in the modulation of blood pressure. His suggested statement for the food and supplement labels was:

“Supportive but inconclusive scientific evidence suggests that diets with adequate magnesium may reduce the risk of high blood pressure (hypertension), a condition associated with many factors.”

However, the FDA concluded that the wording of “supportive but inconclusive” in the proposed statement could mischaracterize the strength of the evidence of the role magnesium plays in cardiovascular health and possibly mislead consumers. So, instead, they suggested the following additional qualified health claims that they would approve:

In other words, their “enforcement discretion” plan is to allow the “qualified health claims,” as long as disclaimers — in the form of their proposed additional qualifying language — are also included, to “prevent the claims from misleading consumers.”

Starting on Page 9 of the 42-page letter, the FDA outlines 85 interventional studies they identified and used to make their determination that the proof that magnesium supports heart health is “inconclusive.” Of those 85 studies — there are more than 3,000 such studies listed in PubMed — they identified 47 from which conclusions could not be drawn. They listed these reasons for not using the studies:

Therefore, the FDA’s conclusions were drawn from 38 intervention studies looking at the relationship between magnesium and the risk of high blood pressure. In the majority of these studies, the FDA determined that there was no significant change in systolic, diastolic, or both blood pressure measurements between the control group and the intervention group.

Foods Must Meet Low Sodium Criteria To Be Included

After documenting the reasons for discounting the study results, the letter identified a secondary factor that must be met for the qualified health claim to be used — the conventional foods must also meet the “low sodium” criteria that the food contain less than 140 milligrams (mg) of sodium of the reference amount customarily consumed (RACC). The letter used simple reasoning:

“Sodium attracts water, and a high-sodium diet draws water into the bloodstream, which can increase the volume of blood and subsequently your blood pressure. High blood pressure or hypertension is a condition that makes the heart work too hard, and the high force of the blood flow can harm arteries and organs (such as the heart, kidneys, brain, and eyes).”

However, this is a simplistic view of how the body works and is not supported by historical documentation. In this short interview excerpt above, James DiNicolantonio, Pharm.D., succinctly explains how the increase in chronic diseases, such as high blood pressure, diabetes and obesity has paralleled a reduction in salt intake.

Your sodium balance is impacted by several nutrients and affected by your kidney health. Your body uses magnesium, calcium and potassium to balance your sodium, which in turn affects other aspects of your health, such as bone density, blood pressure, and heart and kidney health. When you change one level, you affect the others.

Although the sodium restriction has been a cornerstone of heart failure management to move the focus away from the other significantly more damaging white crystal — sugar — one paper published by researchers at Rush University Medical Center found salt restriction was associated with an increased risk of heart failure and death. A second study demonstrated the risk of cardiovascular events decreased as potassium levels increase.

Uncontrolled high blood pressure raises the risk of kidney disease, blindness, stroke, heart failure and heart attack. However, as has been demonstrated by hundreds of research studies across nearly every bodily system, maintaining overall health is not a singular function but, rather, a complex interaction between nutrients, enzymes and bodily systems.

While the FDA didn’t note these studies in their qualified health claim, noted research scientist Andrea Rosanoff, Ph.D., conducted a comprehensive review of studies for over 10 years that built on the past work of the late Dr. Mildred Seelig, a world-renowned magnesium researcher. Seelig had studied the relationship between cardiovascular disease and magnesium for over 40 years. According to Rosanoff:

“By 1957 low magnesium was shown to be, strongly, convincingly, a cause of atherogenesis and the calcification of soft tissues. But this research was widely and immediately ignored as cholesterol and the high saturated-fat diet became the culprits to fight.

Ever since this early ‘wrong turn’ more and more peer-reviewed research has shown that low magnesium is associated with all known cardiovascular risk factors, such as cholesterol and high blood pressure.

Low magnesium levels are also linked to a higher risk of insulin resistance, which is a precursor to Type 2 diabetes. Insulin resistance impairs your ability to regulate blood sugar. In one study, prediabetics who had the highest magnesium intake lowered their risk for blood sugar and metabolic problems by 71% as compared to those with the lowest intake.

It also appears as if there is a bidirectional relationship since high levels of insulin in the blood also lead to further loss of magnesium. One study published in December 2019 again linked low levels of magnesium with an increased risk of diabetes and high blood pressure, both of which are risk factors for heart disease.

Magnesium supplementation not only may lower your risk of Type 2 diabetes, but also may improve your condition if you already have full-blown diabetes. Researchers demonstrated this in a 2019 study published in the journal Nutrients. The researchers engaged 42 people with Type 2 diabetes and allocated the intervention group to receive 250 mg per day of magnesium for three months, while the control group did not receive any supplements.

The data showed a reduction in insulin resistance and an improvement in glycemic control in those taking the magnesium. Additionally, a meta-analysis published in 2007 also found that magnesium intake was inversely associated with Type 2 diabetes incidence. This analysis included seven cohort studies looking at magnesium from either food or supplement sources.

Magnesium and Your Brain

Over the past two years, the rate of depression and anxiety has risen dramatically. While the brain is just 2% of your body weight, it uses nearly 20% of the oxygen supply. Magnesium facilitates processing in your neural network and is used to keep the blood-brain barrier healthy.

Before the pandemic years, anxiety disorders affected up to 13.3% of the population in the U.S. The condition can be debilitating, and like other mental disorders, it exists on a spectrum. Optimal levels of dietary intake are also inversely associated with anxiety and depression.

In an outpatient clinic treating 126 adults with mild to moderate symptoms, researchers found supplementation with magnesium chloride for six weeks resulted in clinically significant improvements in depression and anxiety without side effects.

Another study demonstrated that supplementation could improve mild to moderate depression in adults, demonstrating beneficial effects within the first two weeks of treatment. In fact, the benefits were comparable to prescription SSRI medications but without the side effects associated with these drugs.

In fact, they noted that empiric treatment with a magnesium supplement is justified for all migraine sufferers. Over time, memory impairment occurs when the connections between brain cells are diminished. Many factors can trigger this phenomenon, but magnesium is an important one. As noted by Dr. David Perlmutter, a neurologist and fellow of the American College of Nutrition, writing specifically about magnesium threonate:

“It has now been discovered that magnesium is a critical player in the activation of nerve channels that are involved in synaptic plasticity. That means that magnesium is critical for the physiological events that are fundamental to the processes of learning and memory.

As it turns out, one form of magnesium, magnesium threonate, has the unique ability to permeate the brain and enhance the receptors that are involved in this process.”

Are You Magnesium Deficient?

The recommended daily allowance (RDA) for magnesium is between 310 mg to 420 mg per day, depending on your age and gender. Some researchers believe you may need as much as 900 mg per day for optimal health. However, I believe many may benefit from as much as 2 grams (2,000 mg) per day.

Many people fall short of the RDA when they’re primarily eating processed foods. Several factors can also affect your ability to absorb and excrete magnesium. For example, alcohol intake, carbonated beverages, age, insulin resistance, and heavy sweating can increase your magnesium excretion and raise your risk for insufficiency.

It is important to note that magnesium works synergistically with other nutrients, including calcium and vitamin K2, D and B6. Vitamin B6 helps escort magnesium into the cells where it’s needed most. If you get insufficient amounts of magnesium from your diet, your body will pull it from your bones, muscles and internal organs.

This can lead to osteoporosis, kidney problems and liver damage. By getting enough vitamin B6, it can help ameliorate this chain of events by ensuring the magnesium you consume is being used as efficiently as possible.

One way to determine your magnesium status is to do an RBC magnesium test. This measures the amount of magnesium in your red blood cells. Along with the measurement, you should track signs and symptoms of magnesium deficiency, such as:

Journal of Nutritional Science and Vitaminology, 2003;49(3)

drperlmutter.com, Magnesium and Your Brain