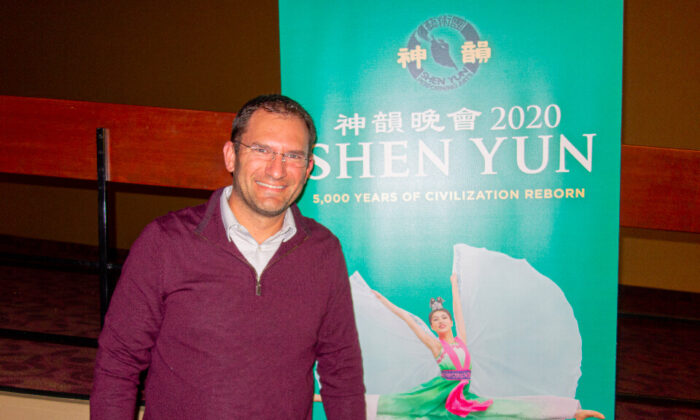 “We wanted to come and we weren’t ever able to,” said Jeremy Pierson, who attended on Feb. 6, 2020. After two years of seeing advertisements for the New York-based performing arts company, the co-owner of a pediatric surgery center in California purchased his Shen Yun tickets nine months before opening night at the William Saroyan Theatre in Fresno.

“And this year when we first started seeing the advertisements that they were coming to Fresno, we said ‘We’re going this year,’ and we bought the tickets, I think maybe nine months ago,”  said Pierson, who works on the administrative and investing side of the health care operation.

“I think [Shen Yun] it’s amazing! The coordination of all the movements represents hours and hours and hours of practice. That’s fascinating. It’s amazing. The discipline from each one of those dancers has to be amazing,” Pierson said.

Pierson’s young daughter Kiara chimed in, “I really, really like it! I think [Shen Yun dancers] … It looks so easy when they do it. But then when you actually try it, it’s like ”Good luck! Break a leg!” Kiara said with a tone of facetiousness, which elicited a proud chuckle from her dad.

“I mean, it’s super, super hard,” she continued. “How they make it so smooth and make it look so, so easy. That’s what I really, really like!”

Pierson found this spiritual and historical aspect of Shen Yun one of its most compelling.

“I think one of the most interesting things to me,” he said, “is that [Shen Yun] is talking about the history before modern-day China, which we assume is just communism and a lack of religion and a lack of understanding of any type of spirituality. But what’s so fascinating about this history that they’re talking about is that there is a lot of spirituality. There’s a lot of these teachings that are much, much older than what we know about modern-day communist China. And it’s just such a rich history. It’s amazing!”

Many of Shen Yun’s performance elements are one-of-a-kind, according to artists and technicians around the world. Its live orchestra is unique in the world, and its backdrops that employ digital projection are patented.

Pierson noted both of these elements as especially memorable for him.

“The music is amazing. Obviously it gives an extra level of importance that the music is live. It would still be beautiful because the dancing is amazing if the music were not live, but since the music is being performed live right here in the theater, it’s amazing! It’s absolutely wonderful.”

Each of Shen Yun’s seven touring groups travels with a full live orchestra comprised of Eastern and Western instruments playing all original scores each season.

Shen Yun’s background stood out to Pierson, he said, “because the colors are so vivid on the screen.”

“And I think that if it were just a screen, it wouldn’t be as good. But what they’ve done with the technology is that they [the characters and dancers] interact with the screen. When the first time that the dancer came and he jumped down, and it looked like he got on to the bird and flew away, the whole crowd was just amazed. They were like ‘Wow!’ So the interaction and the magician who used his wand to pull things out of the screen, I think these are intelligent ways to use a background and yet turn it into something that is interactive with the dancers and with the audience,” he said.

With reporting by Lily Yu and Brett Featherstone.