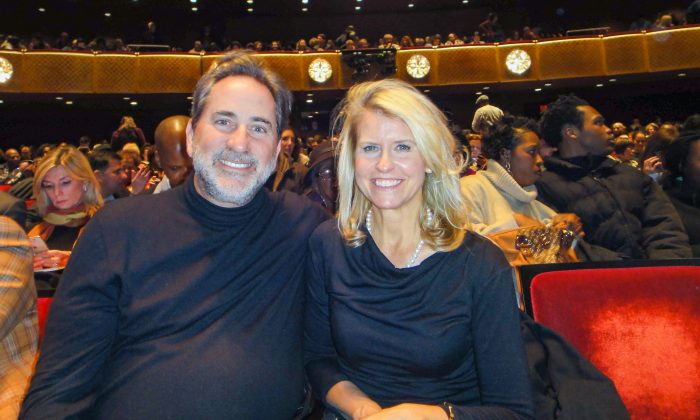 “I love the lines and the symmetry. We have a great view because we are dead center, so we can really appreciate not just the choreography, but the execution of the choreography, the perfect synchronization, ” Rosengard said on Jan. 16.

Rosengard is the president of Anatwine, a global technology company serving the world’s leading fashion brands and retailers. He has consistently been recognized as WWD’s “most powerful people in menswear” and frequently lectures on college campuses like Parsons and FIT.

“I am actually enjoying the backdrops, the scenery in the back and the very subtle movement,” Rosengard said. “Very clever, and very well done.”

New York-based Shen Yun is the world’s premier classical Chinese dance company. Each year, it travels the world with an all-new production, and with it an entirely new set of costumes, all original scores, and new designs for their unique and patented digital backdrop that connects heaven and earth in a myriad of scenes.

Among the new dances is a scene from the Tang Dynasty, what is considered China’s golden age, where female dancers’ long “water sleeves” serve as props that flutter and fly through the air; and a story from the classic novel “Journey to the West,” where the beloved Monkey King returns with epic battles that move from stage to screen with flying leaps and back again. These are just two of the 20-odd pieces that comprise a Shen Yun performance.

The use of the backdrop to enhance the beauty of Shen Yun’s artistry and storytelling was what really captivated Rosenberg. He described the costumes as well, and the pair mentioned the striking use of color in the performance.

“It’s beautiful, it’s really a spectacle, something to see,” said Gillespie, who is a publisher.

“I think the colors are just gorgeous … the dancing is beautiful,” she said.

Gillespie added that it wasn’t often that a performance was done with a full live orchestra, which made it that much more special.

With reporting by Xinxin Teng and Catherine Yang.