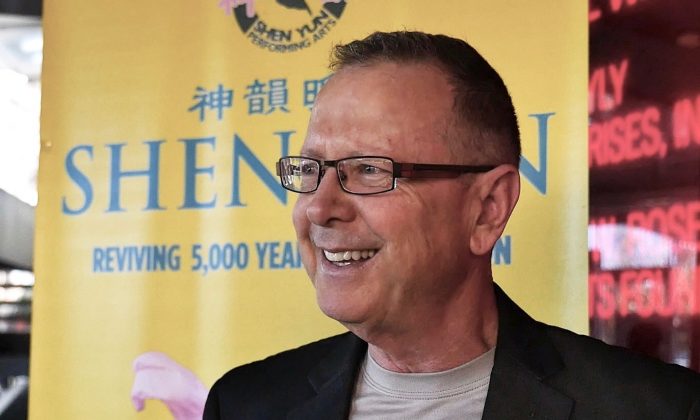 “I love it!” said Ken Fenoglio, president of AT&T University in Dallas after he saw Shen Yun Performing Arts for their final performance at Winspear Opera House on Jan. 10, 2016. (Courtesy of NTD Television)

DALLAS—”I love it!” said Ken Fenoglio, president of AT&T University in Dallas after he saw Shen Yun Performing Arts for their final performance at Winspear Opera House on Jan. 10.

“It is so awesome. I really like the pageantry, the colors, the costumes, the history that this brings to you. It’s just beautiful,” he said.

Based in New York, Shen Yun is the world’s premier classical Chinese dance and music company. It has classical Chinese dance at its heart but gives so much more. The kaleidoscope of colors of the handmade costumes against state-of-the-art digitally animated backdrops brings 5,000 years of Chinese culture and history to the stage, leaving audiences around the world in awe.

It’s fantastic. I love that part where they blend the technology with the live acting—just beautiful.
— Ken Fenoglio

“It’s fantastic. I love that part where they blend the technology with the live acting—just beautiful—just the way they’ve done that, the way they orchestrated the two things together,” he said.

According to Shen Yun’s website, “Shen Yun’s digital-backdrop team creates vividly animated settings, extending the stage and transporting the audience to a world where heaven and earth are one … These digital backdrop designs complement and synchronize all aspects of the performance: the characters, color of the costumes, specific dance movements, props, lighting, the story being told, particular notes played by the orchestra, and special audio effects.”

Shen Yun’s mission is to revive the traditional Chinese culture which was almost destroyed by the the Chinese Communist Party, which espouses atheism. The regime tried to purge China of spirituality, belief in the divine, and traditional values.

The traditional values “such as benevolence and justice, propriety and wisdom, respect for the heavens, and divine retribution, all come to life, washing over the audience,” the website states.

Mr. Fenoglio was touched and inspired by the dance piece depicting the persecution of people for their beliefs.

“I think the principles they’re speaking of are very relevant … the evil of atheism, and the fact that we all need to have a higher purpose, I think that’s going to bring us all together,” he said.

The music of Shen Yun, the soloists and the blended orchestra of classical Western and traditional Chinese instruments, bring an extra dimension to the performance. The tenor, Tian Ge, singing “Life is Fleeting,” so moved the audience, they encouraged him to sing an encore.