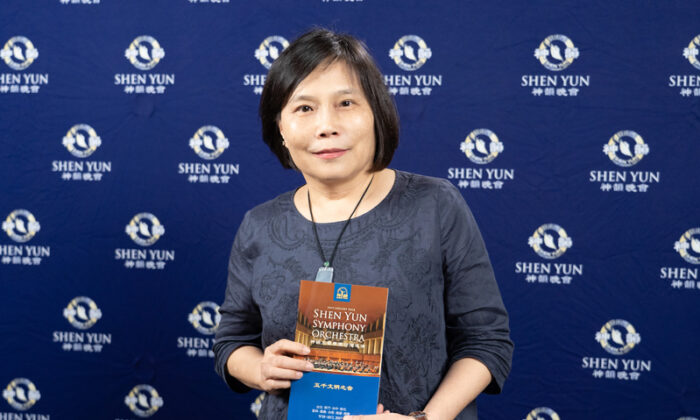 KAOHSIUNG, Taiwan—As a  principal gem appraiser for various gem-related associations and government agencies in Taiwan, Szu-kai Wei is not only a famous gemstone expert but also an enthusiastic music lover.

“[Shen Yun music] is truly wonderful and soul-inspiring,” said Szu-kai Wei, after she attended Shen Yun Symphony Orchestra’s very first performance at the newly established National Kaohsiung Center for the Arts (Weiwuying) in southern Taiwan’s Kaohsiung City along with her friend on Sept. 21, 2019.

According to the Shen Yun website, the company’s “all-original compositions feature the perfect harmony of classical music East and West.”

Awed by the performance with perfect combination of Western and traditional Chinese music instruments, Szu-kai Wei praised, “This is a distinctive musical concert with fantastic ambiance.”

“The rhythmic structure is truly wonderful,” she explained. “The music sometimes is very powerful with a tremendous momentum, and sometimes suddenly very peaceful and very quiet, which can grab and hold the audience’s full attention.”

Szu-kai Wei felt that Shen Yun’s awe-inspiring music has healing effects. “It can inspire those who are in a bad mood, and uplift the spirits of those who feel depressed or dying,” she added.

“Some elements in the music can make you feel your cells suddenly reactivated, as if something we lost before was retrieved,” she said. “It [Shen Yun Symphony Orchestra] is full of energy, and it is an orchestra that can enlighten our lives.”

In addition to enjoying the beautiful music, Szu-kai Wei was also captivated by the exquisite performances of the two conductors. “The two conductors’ gestures were like the water in a mountain stream, which is sometime flowing very quickly, and sometimes very smoothly—I felt they were dancing when they were conducting the symphony orchestra,” she said.

Szu-kai Wei said she used to play the violin when she was younger,  and so she was especially impressed with the performance of violinist Fiona Zheng. “I think her performance was perfect, regardless of whether when she was playing solo or playing in ensemble at the end,” she continued. “It’s indeed not easy to see such a high-level ensemble.”

Fascinated by Zheng’s captivating performance, Szu-kai Wei felt her passion for playing violin was rekindled. “It reignited the spark of my desire to play violin again.”

“Such music can only be found in heaven,” she added. “It [Shen Yun music] can make people find the driving force of life.”