Family Sees Beauty In All Aspects of Shen Yun 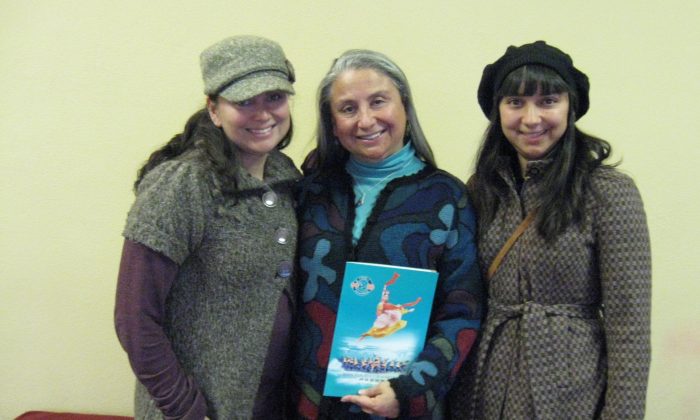 SAN JOSE, Calif—Music, dance, and conviction of beliefs are a big part of Shen Yun. One family that saw Shen Yun Sunday Jan. 4 knows a lot about all three. In the Hartono family, mother, Carmen, teaches religious education, daughter Erica teaches dance, and Stephanie is a musician.

Along with Mr. Hartono, the girls’ father, they all saw Shen Yun perform Sunday, Jan. 4, at the San Jose Center for the Performing Arts.

Mother and daughters shared their impressions of the performance. “The precision was beautiful,” said dancer Erica Hartono.

Erica is a dance teacher and choreographer. She praised Shen Yun’s dancers: “They are very athletic and very fluid, excellent dynamics.”

“I really loved the dynamics” she elaborated, and if her students attended the show she said she would have them notice how the dancers “transfer their movements from being really fluid to very accented.”

Erica started dancing when she was 4. She now teaches at The College Preparatory School in Oakland, at Berkeley Ballet, and around the Bay area.

“It’s wonderful, it was beautiful,” she said of the dancing in Shen Yun.

Shen Yun performs classical and ethnic Chinese dance. According to Shen Yun’s website, classical Chinese dance was “passed down among the people, in imperial courts, and through ancient plays.”

The Shen Yun website explains that “the original forms of many classical Chinese dance movements were similar to those of martial arts; it was just that they were performed differently.”

“You can see the connection with the martial arts,” said Erica.

She said she especially enjoyed the storytelling, such as in the Fable of the Magic Brush.

According to the story, a young painter befriends a maiden and defends her from a band of ruffians. In gratitude, she gives him a magical brush that can transform anything it paints into reality.

To set the stage, Shen Yun uses an animated backdrop, and to tell the story, characters interact with the backdrop.

“I really liked how they used the screen to have the characters jump in and out of the stage,” said Erica.

Erica’s sister Stephanie, a musicologist, shared her thoughts about the music of Shen Yun.

“I really thought that the integration between Chinese instruments and Western orchestration was really cool and really well done.”

“Western music has such a strong harmonic language that Chinese music doesn’t employ, so to fit them into each other and make them work is difficult,” she explained.

“The Western orchestration … had a very strong sense of narrative through the harmonic language, and that was really great,” she added.

In addition to the orchestra accompanying the dancers, several soloists also sing as part of Shen Yun.

“They were so great,”  said Stephanie. “Very powerful voices.”

“It’s always a surprise to me when I hear Chinese songs performed, because the melodies, they’re surprising, they don’t go the same way that Western melodies go, so it was interesting to hear.”

In one dance, she particularly noticed the very long sleeves, called water sleeves, in Sleeves of Grace.

“The way they gathered them and pulled them out again, you could tell that took a lot of skill,” Stephanie said.

“I loved it,” Mrs. Hartono said. She especially liked the stories told through dance.

“There is a truth to them. They are revelations that people get into [their] heart and their soul, and they’re very real.”