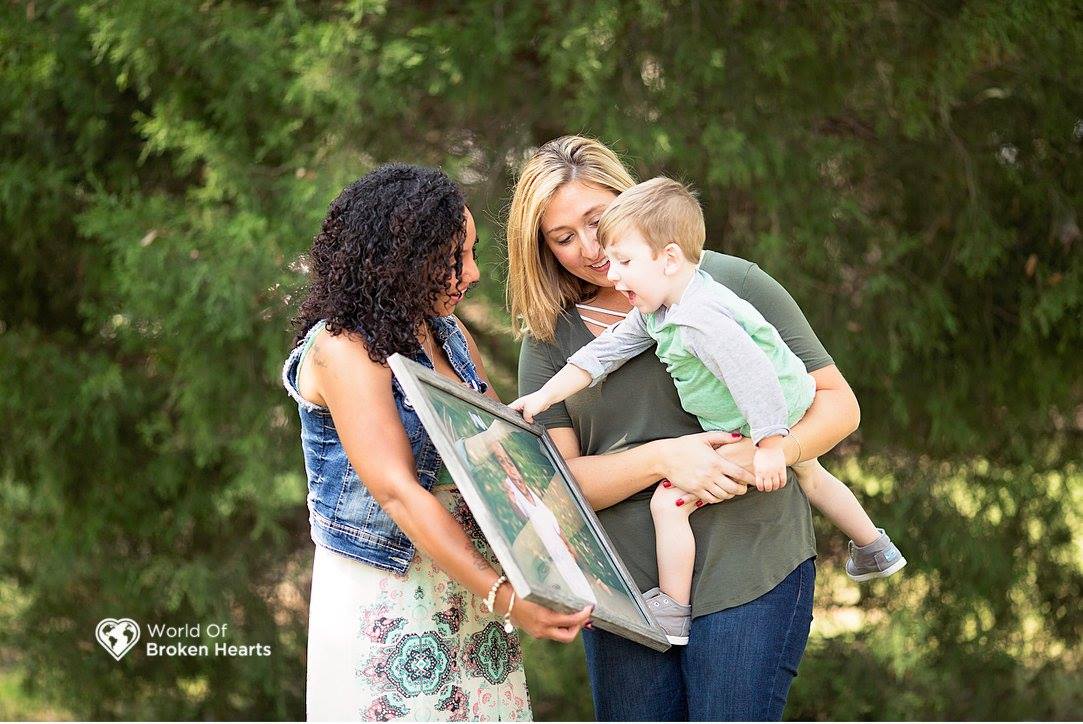 Lacey Tiara Wilcox shows a picture of her late daughter Alaiya to Mason Perkins, who is held by his mother Angela in Centennial Park in Nashville, Tenn., on Sept. 25, 2017. Mason received Alaiya's heart in a transplant. (Suha Dabit/World of Broken Hearts)
People

Lacey Tiara Wilcox listened to her baby girl’s heartbeat again. It had been almost two years she had held her daughter’s heart so close. Only now the heart beats in a body of a 2-year-old boy.

Lacey prayed for this moment, but often wondered if the great gift she and her husband Brandon made on behalf of their daughter was met with appreciation from the recipient family.

The Wilcoxes, of Avon, Indiana, endured a lot of pain in recent years. On Dec. 26, 2015, their 2-year-old Alaiya died of bacterial meningitis, a dangerous disease affecting the brain and spinal cord.

“[W]e were pulled aside and asked about donating her organs,” Lacey said. “My husband and I did not hesitate as we both replied with ‘YES!’.”

“Alaiya was such a giving child that we knew it was the right thing to do,” she said. “We knew that she would be saving others’ lives.”

A year later, the Wilcox family photographer, Nikki Myers, contacted the family. She said “someone special” wanted to write to them and asked for a permission to share their contact.

“I told her yes. But I was so curious who it possibly could be,” Lacey said. “She finally broke down and told me it was the mother of the heart recipient.”

Lacey was relieved. She had wondered if the recipient family appreciated the gift of her daughter’s heart. When the family reached out to her it gave her great comfort.

On Dec. 28, 2016—the one-year anniversary of the transplant operation—Mason’s mother Angela contacted Lacey on Facebook.

Angela had mixed feelings about the meeting. She wanted to show Lacey how well Mason was doing. But she thought it could also reopen painful memories for the Wilcox family.

In the end, they decided to meet in Nashville, where Mason went for a health appointment.

On Monday, Sept. 25, they met at Centennial Park. Wilcox couldn’t put into words the deluge of emotion she went through upon seeing Mason.

He was all smiles, couldn’t stay in one place, and even showed off for them. “We definitely saw Alaiya in him,” Lacey said.

Angela believes that is so.

“I am a firm believer that a parent’s love is forever woven into our hearts,” Angela said.

“[T]here’s no doubt that the heart that beats inside of Mason knows the familiarity of Brandon and Lacey,” Angela said.

Lacey was relieved and happy to see how grateful Perkins was for the gift of life to her son. She was happy to see Mason doing well. Still, it was a bittersweet moment.

“In a perfect world, Alaiya and Mason could have both been saved and Angela and I could have met in the baby aisle of Target, but that isn’t our story,” she said.

The families spend hours together, sharing stories about Alaiya and Mason.

It’s important to Lacey for her two daughters (age one and five) to grow up knowing Mason. She believes there’s a connection.

“We are forever bonded as a unit!” Lacey said.

The families plan to attend an organ donation fundraiser together in October and keep in touch from now on.

“I am forever grateful for the gift of life,” Angela said. “I will always make sure that Mason lives a life big enough for two.”

All photos were taken by Suha Dabit, the photographer who runs the World of Broken Hearts, a program with Project Heart nonprofit to raise awareness about congenital heart defects and organ donation.