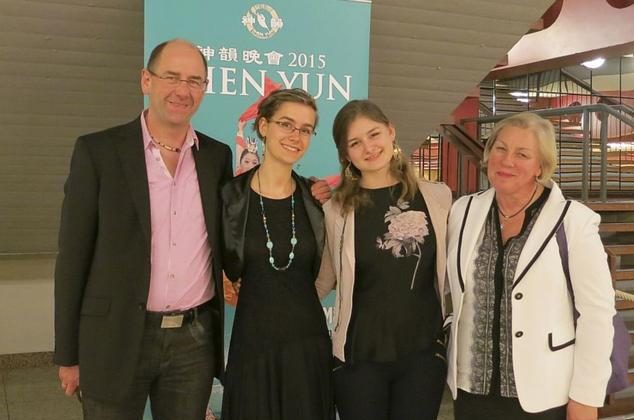 FRANKFURT—One German family treated the chance to see Shen Yun as a pilgrimage. “We try to make it a shared event because it is of the greatest importance to our family in any given year,” said daughter Julia Streif, who is a high school senior.

Mr. Frank Streif, Ms. Streif and daughters Anna and Julia drove 311 miles from the German Allgaeu, near the Austrian border, in order to see Shen Yun at Jahrhunderthalle in Frankfurt on March 14, 2015.

“It leaves us for a while at a loss of words, just as it is happening now,” said Miss Streif.

According to Shen Yun, “Through the universal language of music and dance, Shen Yun weaves a wondrous tapestry of heavenly realms, ancient legends, and modern heroic tales, taking you on a journey through 5,000 years of Chinese culture. Its stunning beauty and tremendous energy leave audiences uplifted and inspired.”

Mr. and Mrs. Streif have seen Shen Yun four times but missed it in 2014, though their daughters did see it in 2014.

“There is a new program year after year with a fantastic choreography. It is an unforgettable experience that is even more enjoyable because we are there as one family. It is a must see,” said Miss Streif.

The young student said to talk about Shen Yun in depth is not easy. “It is difficult to express my thoughts about Shen Yun. The show is superior to everything I have experienced so far in my life.”

Shen Yun is Beyond Words

According to Shen Yun, “China was once known as Shen Zhou, the Divine Land. This profound name describes a land where deities and mortals coexisted, and a belief that the divine transmitted a rich culture to the people of the earth … For thousands of years, Buddhist, Taoist, and other disciplines were at the heart of society. Calligraphy, music, medicine, attire, and much more were said to have been passed down from the heavens.”

Anna Steif, the elder sister, is in her second term of studying Chinese in a university in Wurzburg.

She said, “Shen Yun can’t be described with mere words. On the one hand it is breathtaking, when one just thinks of the colors, and a treat for the eyes. On the other hand, it is magical and touches the soul. Also it is difficult to grasp all that is inherent in Shen Yun’s show. It is just out of this world.”

Her mind was filled with what she just had seen on stage, but like her sister, she said it was hard to express. She said, “It is difficult to come up with a concrete impression and expressions about this show. I feel this way because it imparts something of the divine, something transcending. There is something in that word Shen Yun that one can only feel but not express.”

Many in the audience will tell others about the show, and so will Miss Anna Steiff. “I will tell them that it will be worthwhile to see the Shen Yun. It is unbelievable in its combination of costumes and headdresses. Nothing is out of place.”

She will also say, “It is not only what one will see, but also that one is deeply touched.”

Mr. Frank Streif, who is head of an institution for mentally ill people, felt as connected to Shen Yun as his daughters.

Many of Shen Yun’s backdrops depict celestial realms and divine beings, according to its website. The principles of benevolence, justice, propriety, and wisdom all come to life.

Mr. Streif said, “I perceive that the movements, the pictures on the backdrop and the spiritual message are connected, and form one entity.”

Reporting by Yu Ping, Matthias Kehrein and Heide B. Malhotra