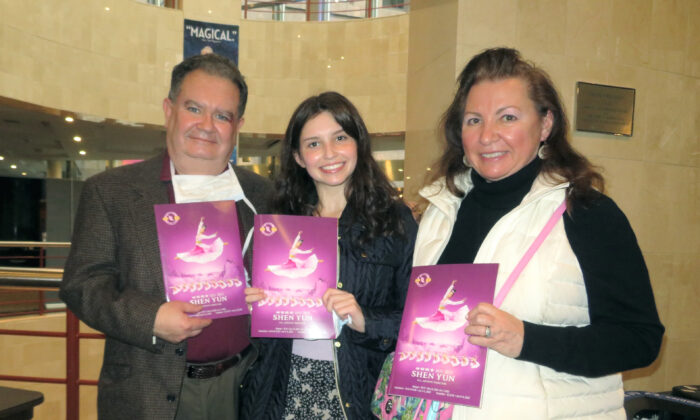 Drs. Jose Peña and Jean Kois with their daughter Lily at the Charlotte performance of Shen Yun on Jan. 9, 2022. (Nancy Bao/EpochTimes)

CHARLOTTE. N.C.—Dermatologists Dr. Jose Peña and Dr. Jean Kois, and their daughter Lily Peña had the chance to take more than a skin-deep look at Chinese culture. They attended the Shen Yun matinee at the Belk Theater on Jan. 9.

“I love how they combined classical [dance] with the athleticism in the artistry and the beauty of the costumes— it was gorgeous!” said Dr. Kois.

The family has seen the performance a few years ago and decided to come back. Dr. Peña appreciates that Shen Yun is based in New York, and not Beijing.

“I like it that they’re not mainland Chinese because I’m from Cuba originally, and I know about communists,” said Dr. Peña. “I came here when I was nine years old, and so it’s fantastic that you preserve your customs and not let it fall apart with the communist party.”

Shen Yun translates to “the beauty of the heavenly beings dancing,” a nod to the fact that Chinese culture is believed to have been divinely imparted. The Chinese people have historically been deeply spiritual, something that the atheistic communist party has tried to erase from history. Shen Yun instead puts faith front and center in its programming, highlighting the influence from Buddhism and Taoism that have left deep marks in the culture.

Miss Peña had high praise for the dancers. As a young ballerina herself, she found the synchronicity among them very impressive.

“They were just so together—I’ve never seen anything else like it,” she said. “It’s just as good the second time, and everyone was so together and their technique was perfect.”

“Before we came here, I went and researched everything,” said Mrs. Hermsdorfer. “So it’s interesting to see how it’s put on stage to go through pre communism and the struggles of just being able to have your own belief in China.”

Shen Yun’s performance covers present-day China as well, namely matters of religious persecution taking place today. It’s a topic that hits home for many of its performers, who are refugees from China. No matter the topic, Shen Yun’s storylines end on a note of hope and redemption—a nod to the belief that goodness will prevail.

“I think it’s wonderful,” said Mrs.Hermsdorfer. “I think that people need to be far more tolerant. And it’s beautiful to see kindness and people standing up and, and being kind and, and believing and positive things.”

Naturally, as an electrical engineer, Mr. Hermsdorfer gravitated toward the patented digital backdrop, which allows the action on stage to extend into fantastical locations, such as the heavens, ancient streets, or remote mountains.

“Whoever came up with the idea of implanting the movement of the screen into the stage is absolutely terrific,” he said. “It’s really a great show. Enlightening.”