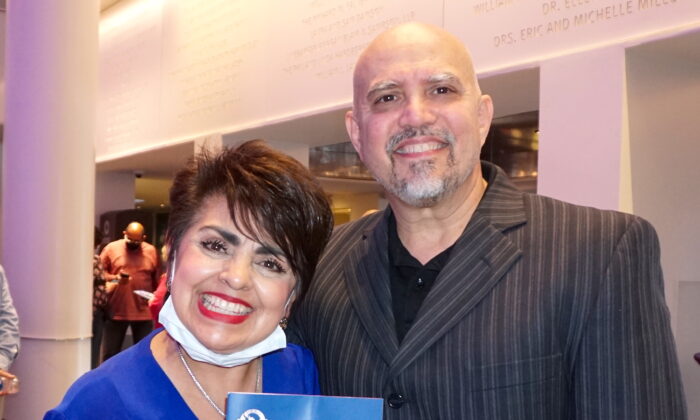 SAN ANTONIO, Texas—Manuel Calvillo choked up, tears welling, as he spoke of what he just saw. Mr. Calvillo just had a spiritual breakthrough, but he was not sitting in a church or temple—he and his wife Maria had just seen Shen Yun at the Tobin Center for the Performing Arts on Saturday afternoon.

The Calvillos run a staffing and recruiting business, for which Mr. Calvillo is the IT manager. He’s also a classical violinist.

From the moment the curtains opened on a heavenly scene, Mr. Calvillo saw the grandeur and compassion imbued in Shen Yun.

“The first movement, the description of how man came to Earth and then the plight of man after the fact, how monarchies were established on Earth and how it went against man because of their loss of divinity … that captured my interest,” he recounted.

“The cultural aspect, the aspect of divinity, of how man came to Earth first in divine form and then lost his divinity, was really, that’s what part of it that captured me the most. I think because I’m a musician, it …” he paused, overcome with emotion. “It just captured a very special place in my heart.”

“Being a classical musician, one of the things that I enjoyed the most was to be able to see the incorporation of European and Asian instruments in the music, and I think that is really huge because we find even in Greek culture, how many of the Asian concepts were incorporated into Greek culture and artwork and things of this nature, so I think it allows for us to be able to see how one we are as a people,” he said.

Mrs. Calvillo indicated that it was her first Shen Yun performance, but not her last.

“This is the first time I’ve come to this performance, so it was meaningful, very deep, made me understand the culture of the Chinese, and I loved it. It touched my heart … The music was beautiful, the orchestra, amazing.”

Seeing Shen Yun “reawakened some of my Christian beliefs in that we all believe in the same God,” said Mr. Delk. “There’s sometimes a lot of discord between different religions. But as long as we all agree that it’s the same God that we worship, that’s all that matters.”

He continued, “The message I got is that first of all, there is a divine Creator who created a good world. And sometimes it’s the people that mess up this good world, but he always comes back to fix things.”

Mrs. Delk said she enjoyed the historical aspects of Chinese culture. “It goes back thousands of years, and it makes me realize how young our country is,” she said.

The couple lived in South Korea for a time, and Mr. Delk’s mother is Japanese.

“I’m very familiar with some of the Asian cultures and traditions, but I realized that China was really the home, the base of all the Asian cultures that eventually spread out to the other countries,” said Mr. Delk. “And that’s why watching this really brings back a lot of great memories.”