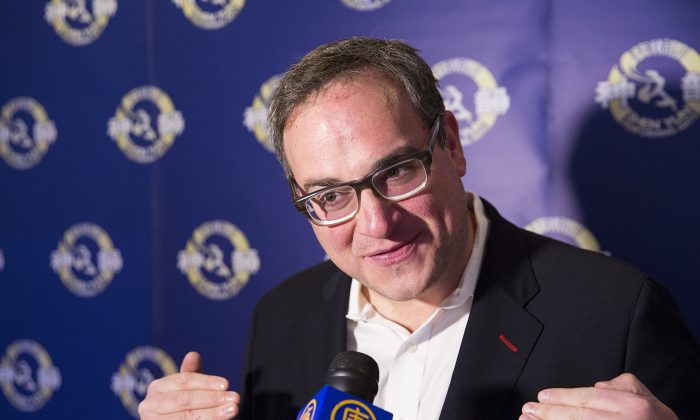 TORONTO—TV host and columnist Ezra Levant came to see Shen Yun Performing Arts with his daughters for a second time at the Sony Centre on Saturday Jan. 24.

“It’s just as beautiful as it was last year, the music and the dancing is great, my kids love it,” Mr. Levant said.

The company tours the globe each year with all new programming, featuring dance pieces presented in the form of mini-dramas as well as musical performances. The storylines and themes in the programs are inspired from legends and stories from the start of the Chinese civilization all the way to the present day.

“I am not an expert on dance and the arts but I have seen enough shows to know that this is first rate, first class, world class performance,” Mr. Levant said.

Mr. Levant is a well known Canadian media personality, and is currently a broadcaster and columnist for the Sun News Network. He was recently voted number one in a Globe and Mail online poll ranking the biggest names in Canadian broadcasting.

Because of the fact that Shen Yun is independent of the Chinese regime, and due to the company’s revival of ancient traditional culture—which the Chinese communist regime has tried to eradicate in different campaigns—as well as the company’s portrayal of persecution of Falun Gong in some of the dance pieces, Mr. Levant said he has high respect for Shen Yun.

“It’s not overdone, it’s not heavy duty here, but the point is made,” Mr. Levant said.