Executive Producer Sees Spark of the Divine in Shen Yun 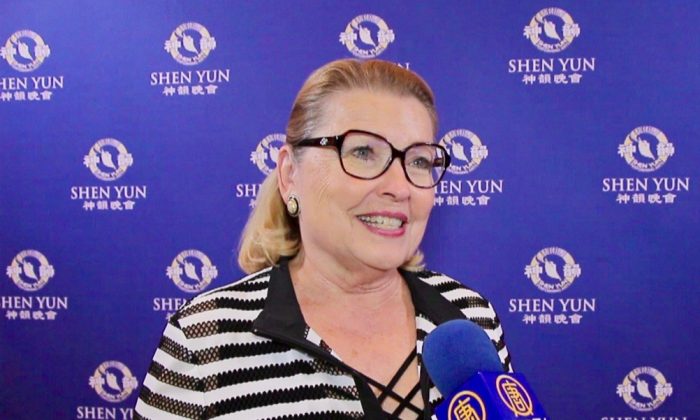 ORLANDO, Fla.—The traditional Chinese culture is believed to be divinely inspired, and Shen Yun Performing Arts, the dance and music company bringing the nearly-lost culture back to life, was named for their wish to capture in their art “the beauty of divine beings dancing.”

“Absolutely I think [Shen Yun] captured it perfectly,” said Marita Valentine, who witnessed a performance on March 14 at the Dr. Phillips Center for the Performing Arts in Orlando.

“Divinely inspired—yes. I think that in the movement and the presentation of the costuming, in the choreography and the direction, and in the explanation prior to each of the presentations, that came through beautifully. It was divine,” Valentine said with a laugh.

Valentine has been an executive producer, producer, director, and choreographer for Walt Disney Productions, and has a lifelong love for the performing arts. It brightened her day and lightened her mood to see the beauty of New York-based Shen Yun’s artistry, and even more so when she saw the company was conveying little known information to the world as well.

“I particularly like the fact that it is original in the ethnic tradition,” Valentine said. Among the 20 vignettes in each Shen Yun production, there are classical Chinese dances that show some aspect of its grand dynasties, tell a story from myth or legend or historical account, or bring to life a region or ethnicity’s customs through ethnic or folk dances.

Shen Yun’s mission is to revive this 5,000-year-old civilization, which Valentine agreed was a must.

“I think it’s lovely that you did it in such a tactful and nice and very lovely way,” Valentine said. “[The program] dealt with some issues that were rather difficult and I thought it was done with great panache and grace.”

Among the difficult issues is the fact that Shen Yun is not permitted to perform in China, the country of origin for the dance forms audiences around the world can now see through Shen Yun.

The issue was touched upon in a contemporary story set in modern-day China, where we see people of faith holding onto traditional values, and how that can even be a dangerous thing in China today.

“It was great, it was tongue-in-cheek, but so true,” Valentine said. She said she caught some commentary on modern life, and what we lack when we lose these ties to traditional values.

“We’ve lost the communication and I think [that piece] depicted it extremely well,” Valentine said with a laugh, referencing a little moment including a cell phone. “Unfortunately the comparison of where we came from and where we are today, the presentation showed that we’ve lost some of that divine spirituality.”

“But hopefully, in seeing it, and we all see it clearly, it might reverse itself as time goes by,” Valentine said.

Valentine was full of praise for the artists’ skills, overjoyed that Shen Yun travels with its own full orchestra with classical Chinese instruments blended in, and fascinated to learn that its dancers train at Shen Yun’s own school.

“I thought that was wonderful,” Valentine said. “It’s wonderful that you’re keeping the tradition alive.”