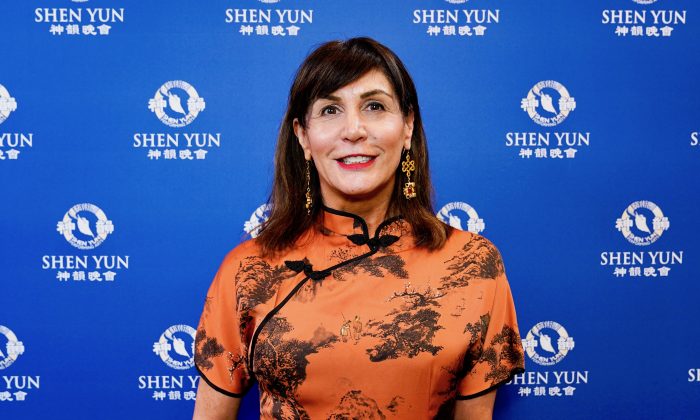 PHILADELPHIA—Felicia Loveys didn’t know what to expect when she walked into the theater to see Shen Yun Performing Arts. But as she was watching the performance, Loveys said it made her feel so energized that she wanted to get out of her seat and dance.

“I want to get up and dance. I want to do a rush and split again like I used to when I was cheerleading, it makes me feel very energized,” she said, adding that she could feel the dancers’ energy coming from the stage.

“You can feel the dancer’s energy, especially with the acrobatics. It’s amazing how many repeated flips and jumps they can do without catching their breath. I mean, truly it’s astounding.”

Loveys, an executive coach and the founder of Love Your Life Coaching, saw Shen Yun at the Merriam Theater in Philadelphia on Feb. 24. The New York-based company is currently touring the world with the mission to revive China’s 5,000 years of semi-divine culture.

She said she found the stories interesting and different from what she was familiar with.

“I don’t know a lot of ancient Chinese history, and the stories are interesting and they’re very fun, there’s a little comedic gauge to it so it’s a little farcical, so it’s very fun,” Loveys said.

Shen Yun’s performances depict stories that showcase historical events, myths and legends passed down generation after generation, and even modern-day pieces portraying today’s real-life human rights abuses in China like the persecution of the Falun Gong, a spiritual discipline that many of the performers practice.

Falun Gong, or Falun Dafa, teaches “Truthfulness, Compassion, and Tolerance” and has helped over 100 million Chinese people today understand and return to the essence of traditional Chinese culture. But the Chinese regime banned the practice in 1999 and has since continued to systematically persecute Falun Gong adherents in China.

These stories portray themes like spiritual devotion, the benevolence of gods, good and evil, divine retribution, and the search for the meaning of life, according to the company’s website. Such values are foundational to traditional Chinese culture and are not political in nature. Instead, they encourage audience members to reflect on modern society and the world around them.

Loveys said she found it sad that such oppression is still happening in China. She said, “it’s sad that it’s so oppressed in today’s society in China.”

In addition, she praised Shen Yun’s effort to revive the genuine Chinese culture that was lost after seven decades of communist rule.

“It’s wonderful [to be able to see] anything that is historical like that, that is not taught in the schools or even culturally known probably by a lot of Chinese American themselves depending on what their families celebrate. So I think it’s wonderful to have the historical component, the religious component, and of course the exquisite dancing,” she said.

Dance a Reflection of Inner Self

Classical Chinese dance has a history of thousands of years and was passed down continuously within the imperial palace and ancient Chinese theater and opera. It was absorbed wisdom from every era and dynasty before becoming a complete system of dance embodying traditional aesthetic principles with its unique dance movements, rhythms, and inner meaning, according to the Shen Yun website.

The dance movements of this system can bring out the inner meaning of intrinsic thoughts and feelings, reflecting the peculiarities of human nature, the standard for human conduct, moral concepts, mental state, and one’s value system. China’s deep cultural traditions are contained in classical Chinese dance, allowing its movements to be richly expressive, something that Loveys could see.

“It’s exactly how they explained with the divine coming out through the dance, the inner person being expressed through the actual movement of the dance,” she said.

“You really can’t be an exquisite dancer unless you have an emotional connection. You can really feel that storytelling.”