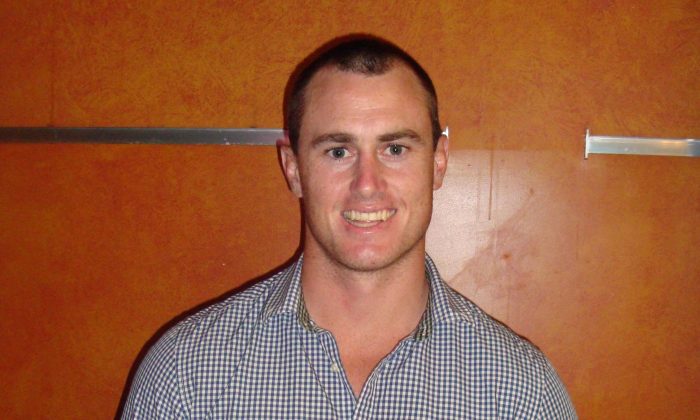 SYDNEY—For Mick Snowden, “Chinese traditional dance is a little bit ‘left field’ from what I normally do, but I really enjoyed it! I recommend it to anyone!” he said. He attended Shen Yun Performing Arts at the Capitol Theatre on the eve of Valentine’s day, Feb. 13.

Perhaps what brought Mr. Snowden to see Shen Yun was because his fiancée used to dance with the German Royal Ballet. He said he had seen a lot of classical ballet before but never classical Chinese dance.

“It was all pretty impressive,” he said. “It was very elegant, very well done, very in sync. It’s really, really impressive.”

One dance that left him a lasting impression was Sleeves of Grace, which featured gentle maidens gliding on a lotus pond, creating ethereal patterns in the air with their long elegant silken sleeves.

Each dance embodies qualities reflective of the essence of the divinely-inspired Chinese culture, such as harmony, tolerance, courage and loyalty.

Mr. Snowden said, “The costumes were amazing. The integration with the back screen is pretty amazing.”

He said he would recommend Shen Yun to friends and family “In a heartbeat.”

‘It brings me to childhood’

For Ms. Angela Erceg, who is training to be an English professor, her first time seeing Shen Yun was a breathtaking experience.

She said moral values were declining today and many people were just living aimlessly, she felt Shen Yun was bringing back those values.

“Bringing back that part of history where they had such a divine part of how to live a life, in a way, brings what is important for you in this life. So I think they are doing it marvellously,” she said.

Ms. Erceg’s sister, Elena Molnar, a teacher of Serbian and a book keeper, says Shen Yun gave her a chance to dream. This is her second time seeing Shen Yun.

“It brings me to childhood. The colours, just amazing. It gives you a chance to dream,” she said. “Everything is beautiful and just … I can’t describe. I just love the feeling.”

Ms. Erceg felt Shen Yun brings a special peace to her heart, she said that people today are so busy with modern living they don’t have time to focus on other things.

“But this show brings you the pure … it’s very innocent, and that is kind of what we are missing.”

‘So beautiful and eloquent’

“The Chinese classical dance, it is so beautiful and eloquent,” Ms. Edelshtein said.

Mr. Budde said, “It’s got a sort of spectacular essence to it, and the colours are very lively and there’s lot of energy in there. Very beautiful, very nice.”

“[Shen Yun] is bringing freedom to the people and the spiritual essence that has been there for centuries,” she said. “I thought it [was] quite touching.”

Ms. Edelshtein explains her understanding of the performance: “Basically nowadays in China, spiritual practice is denied from people. Hence Shen Yun [is bringing] back the freedom to the Chinese people, and I believe in that,” she added.