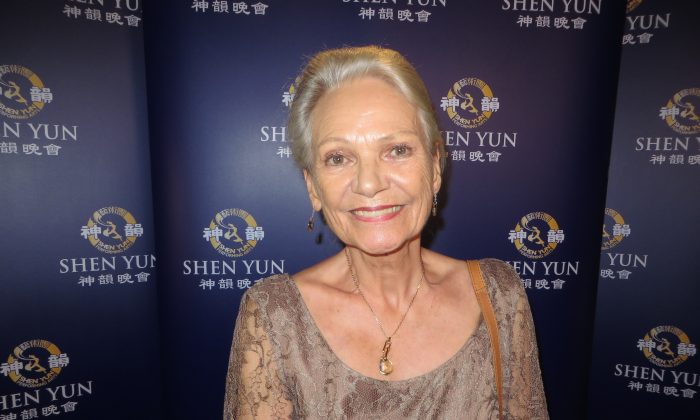 SYDNEY—”I think it’s wonderful, I love it.” said Edith Krohn Grant, who was once a professional ballerina, after seeing Shen Yun Performing Arts for the first time, at the Capitol Theatre on Feb. 8.

“Everything, from the dancing to the technique they have, beautiful costumes and the backdrop. It’s wonderful,” she said. “It was fantastic.”

“It’s different to the classical ballet of course,” she said. “I liked it very much.”

She was really moved by the choreography and the ability of the dancers to convey so much meaning through their dance.

“The way they make their movements, it is very good,” she said. “It is like they are talking to you.”

Her husband, Markus Csanits, a chemical engineer and managing director at Machine and Chemical Technology, felt he learnt more about Chinese culture through the stories depicted on stage.

“My wife is Chinese, so it was really interesting for us to see all the stories that I already learnt. But there were new stories that I haven’t heard of,” he said.

“I got the chance to learn more about the Chinese history and culture. The stories behind it are traditional.”

Shen Yun performs mini-drama pieces derived from stories and legends that are based on documented events spanning past dynasties to the present day. The stories exemplify moral values such as loyalty, selflessness and courage.

According to the Shen Yun website, “These stories also bring out faith in the divine, reflecting the essence of traditional Chinese culture.”

“5,000 years all in one afternoon. That is not easy to do,” he said. “It was very entertaining. It is technically very good.”
Mr. Csanitis said. “I will definitely come back … I was really, really impressed.”

Founded in 2006, Shen Yun has grown to four touring companies that perform in more than 100 cities every year, each year with an all-new program.