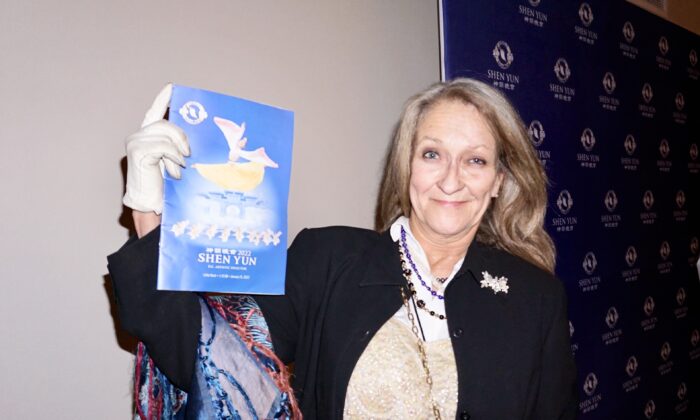 LITTLE ROCK, Ark.— Faith and hope have helped humanity get through one tough period after another. After Susan Kol Margan’s experience with Shen Yun Performing Arts, she shared how her faith is getting her through the pandemic.

“How can you be afraid and believe in a higher power? You cannot—that shows lack of faith. And I have full faith. We just have to hang on and go through,” Margan said.

She added that she could feel positivity radiating from the stage during the performance.

“There’s just a greatness about it—there’s love coming out. Compassion. And everyone in the audience can feel it,” she said.

She shared that she made a long drive to be able to see New York-based Shen Yun and she felt uplifted after the performance.

“I drove four hours to get here,” she said. “The performance is so colorful and so beautiful and so uplifting. So yes, the energy and the colors are beautiful. Everything made the heart feel good.”

Margan was also highly aware of the difficulties that the Chinese communist regime is giving to its people. New York-based Shen Yun shares the story of Falun Gong practitioners being persecuted for their faith in China and although Margan was no stranger to such stories, she was still deeply moved.

“I am very much aware of the persecution, of those that protested in Hong Kong, of the monks in Tibet, and of all the Chinese people,” she said. “I couldn’t help crying because I’m aware of the organ harvesting and it’s really wrong. It’s a sad world. But good will always win above evil. It’s just going to be a long fight.”

Devon Baxter was also in the audience this evening and she said she appreciated every aspect of the performance.

“I think that for me the color was really healing. Bright colors elevate your mood so I appreciate every aspect of what was done there. I think the dance and the movement, the human element, and telling of the story, every bit of that was powerful,” Baxter said.

She added that coming to the performance was a blessing and it didn’t make her afraid.

“I think this was great and I think it was a blessing. I don’t think anything harmful would come for us gathering like this. Not at all. I think the performance was a blessing. Absolutely,” she said.

Shen Yun is committed to showing audience members the best of their art and the best of China before communism. That dedication comes through to the audience many many can feel their passion.

“Very heartfelt, very passionate. I just feel that there is a message trying to get our attention and they did it so beautifully. I love the variety of the show, I didn’t expect that. And the technology was really fine and we were not expecting that. Fantastic,” she said.