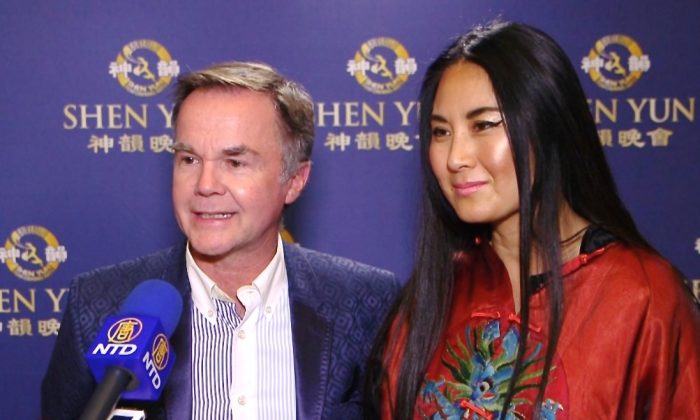 Mark Carney, Honorary British Consul for the states of Quintana Roo and Yucatan at the British Consulate in Cancun, Mexico, and a friend attend Shen Yun Performing Arts at the Reynolds Hall in the Smith Center for the Performing Arts in Las Vegas on March 3, 2015. (Courtesy NTD Television)

LAS VEGAS—”Everybody should see this,” said Mark Carney, Honorary British Consul for the states of Quintana Roo and Yucatan at the British Consulate in Cancun, Mexico, after attending Shen Yun Performing Arts at the Reynolds Hall in the Smith Center for the Performing Arts on Tuesday, Mar. 3.

Since its founding in 2006, Shen Yun has become a global phenomenon, touring the world with four companies simultaneously and touching audiences worldwide. The New York-based non-profit aims to revive true, divinely inspired Chinese culture and share it with the world, according to the company website.

Mr. Carney, who is also the director of sales and marketing for Royal Resorts in Cancun, said he loved all of Shen Yun’s dances, which employ the rigorous and richly expressive art form known as classical Chinese dance.

The British Consul was very impressed that the performance included a full symphony orchestra with a mixture of Chinese and Western instruments, and he loved the original compositions.

Mr. Carney said one piece he particularly enjoyed was The Fable of the Magic Brush, in which a kind-hearted young man defends a mysterious woman from a band of ruffians. In gratitude, she gives him a magical brush that turns anything he paints into reality.

Shen Yun’s interactive projected backdrop is used extensively in this dance piece to bring the young man’s paintings to life and reveal the maiden’s true form, a silver dragon.

“That was really well choreographed with the video as well,” said Mr. Carney.

Shen Yun has now been seen by millions, with sold-out performances and standing ovations at the world’s top venues. The company produces an all-new program every year.

Audience member Batina Adams is a mother with a two-month-old newborn son, and she used to work for an airline company. She met her husband Joe Adams, the security director for Sky Las Vegas, at a U.S. Military base in Afghanistan.

“The show was great, awesome. I just loved it,” said Mrs. Adams, who said she is originally from Kyrgyzstan, which borders China.

Mr. Adams thought Shen Yun was very unique, and he said it was interesting how a couple of dance pieces even depicted modern Chinese history and what life is like under communist rule.

“I got a better understanding of what that’s like through the art inside, which was neat,” he said. “You can see it in the performing arts, which is pretty cool, and something I hadn’t seen before.”

“Both China and the west have a long history of artists integrating spirituality into their work. Today, Shen Yun’s artists follow this tradition, drawing inspiration from the spiritual discipline Falun Dafa,” according to the website.

Yet Shen Yun cannot be seen in China, where a persecution campaign against the practice was initiated in 1999 by the Chinese Communist Party and continues to this day.

Inspired by Falun Dafa’s principles of truthfulness, compassion, and tolerance, Shen Yun’s artists demonstrate the courage and hope of those living in China who peacefully work to expose the unjust arrest and torture of innocent people.

Mr. Adams said his wife told him during intermission that she was very touched by the dance piece The Power of Compassion, which shows Falun Dafa practitioners’ kindness to police officers, even after they were beaten by them.

“Even though they were hurt, they didn’t take it personally because of their beliefs,” said Mrs. Adams.

Mrs. Adams also said she felt a message in the Shen Yun performance that although people’s spiritual beliefs are different around the world, experiencing something holy is beyond one’s ethnic group, age, or any definition.

“Amazing. I was really impressed,” she said.