‘Everybody Needs to Love Everybody’: Family Learns More About Unity After Seeing Shen Yun 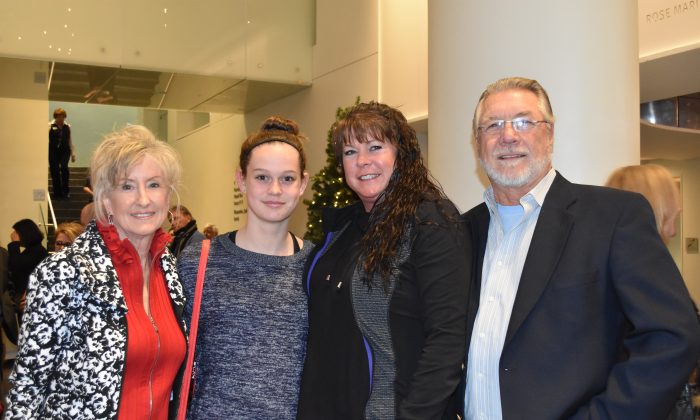 SAN ANTONIO—Cheryl Chambers can’t wait until next year when Shen Yun Performing Arts returns to San Antonio, so that she can experience it once more.

Chambers, who saw the performance at the Tobin Center for the Performing Arts on Dec. 29, felt the lessons foundin the story dances left a lasting impression on her. So much so that she wanted her 13-year-old granddaughter, Millie, to experience these lessons as well.

“The lessons that they were trying to teach you in relation to patience, and love, and the Creator, God … was absolutely stupendous,” she said.

“We wanted [Millie] to see this so badly, just for her impression.”

Surely enough, Millie also enjoyed the performance. She particularly enjoyed the opportunity to “see [China’s] culture and traditions,” which is something Shen Yun aims to revive.

The New York-based company was formed by a group of artist in 2006, who had the wish of bringing back China’s semi-divine culture—a treasure that was nearly lost—to the world. These 5,000 years of culture were decimated under decades of repressive campaigns waged by the current Chinese communist regime.

Through performing arts, the company aims to restore universal principles and timeless messages that have taught people to live morally and lead virtuous lives in the past. Chambers, a co-owner of a radiology facility, said these messages delivered by Shen Yun need to be delivered more often.

Her daughter, Courtney Howerton, agreed, saying what the performance portrayed was more than just culture, as it had a humanitarian message. She said Shen Yun reminded us that, “the world needs to be better, do better, be more united.”

Traditional Chinese culture is replete with virtues and values that stem from ideas like the harmony between Heaven and Earth, the balance between man and nature, and divine retribution. People in the past tried to practice these ideas by incorporating them into their lifestyle, and arts like in calligraphy, music, medicine, and attire.

Classical Chinese dance is also one such form in which the ancient Chinese tried to incorporate such concepts. Shen Yun uses this art form in order to restore the best qualities of humankind on stage—like truth, goodness, unity, and peace.

To be able to express such qualities, Shen Yun performers also have to learn to embody these traditional principles by cultivating their characters and self-improvement. Thus, many of the performers practice Falun Dafa, a spiritual practice that teaches the principles “Truthfulness, Compassion, and Tolerance.” This practice has helped over 100 million Chinese people today understand and return to the essence of traditional Chinese culture.

Shen Yun also showcases some Falun Dafa-related dance stories and lyrics, which, like other stories, portray themes like spiritual devotion, the benevolence of gods, good and evil retribution, and the search for the meaning of life, according to the company’s website. And the lyrics of one of such song are what captivated Chambers’s husband, David, during the performance.

“I was so involved with the opera singer that I was not reading the words, the lyrics until I saw how religious meaning that was that, ‘we’re all created the same, and we have a Creator, and he doesn’t care who we are,'” said David, who had been in the Navy and Air Force for 24 years.

“I mean, everybody needs to love everybody. And I love your culture.”