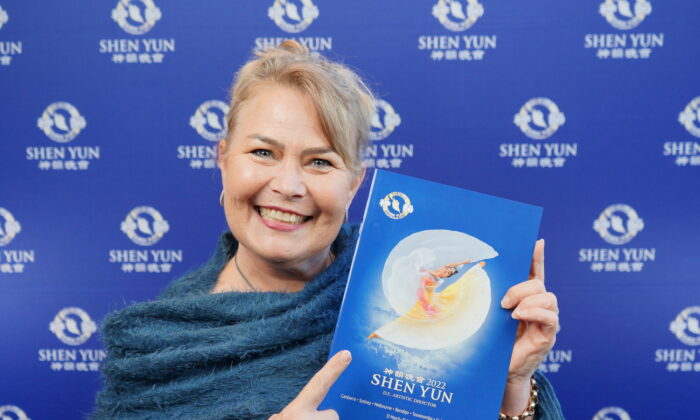 Ms. Johnston attended the New York-based Shen Yun‘s matinee at Sydney’s Lyric Theatre on April 16, where she was captivated by how the technology creates a seamless extension of the stage, allowing dancers to appear to fly off the stage.

“I actually thought it was flawlessly done and I actually looked forward to it happening each time when one of the dancers would drop over the back and engage in the graphic design background, and then [they] would come back in,” she said.

“I just thought it was flawlessly done, and it gave dimension to the actual performances.”

Shen Yun is the world’s premier classical Chinese dance company. Its performances take audiences on a journey across China’s 5,000 years of authentic culture, which almost went extinct under communism. In fact, Shen Yun declares that it presents “China before communism.”

China was once known as the “land of the divine.” In fact, ancient Chinese people held the belief that their culture was divinely bestowed. Its ancient people sought harmony between Heaven, Earth, and humankind, the company says on its website.

Ms. Johnston emerged from the performance, saying it made her feel happy and more connected to her fellow man.

“It’s actually really lovely to be a part of Chinese dance culture for a moment and know that I was accepted, being, you know, in the audience, and to be given a little bit more awareness and greater understanding. So I really actually appreciated that,” she said.

For Ms. Johnston, Shen Yun was “not just about dance,” but went beyond to be a spiritual experience that made her feel “that we’re all connected, really and spiritually.”

With this in mind, she appreciated the performers wishing the audience a happy Easter at curtain call.

Shen Yun ‘Took Us to the Heavens’

Christopher Foster-McBride, the director of a healthcare consultancy, was struck by the choreography, beautiful colours, elegant dancing, and exceptional use of technology in Shen Yun’s performance.

“Very exceptional. So precise. Really elegant. It’s amazing,” said Mr. Foster-McBride, who treated his fiancé Alice Mendes to see the performance ahead of their wedding.

“We’re getting married next Saturday. So, this is a wedding present. It’s Alice’s birthday on Monday. So, we’ve come for a celebration. We’re having a fantastic time. And we’re really, really happy we chose to come to this show,” Mr. Foster-McBride said.

Shen Yun was formed in 2006 by elite artists with the mission to restore China’s traditional culture, steeped in the country’s Buddhist and Daoist traditions, which had all but been lost under communism.

With these revived values and traditions presented in Shen Yun’s performance, Ms. Mendes was struck by a scene that depicted a divine being that “took us to the heavens, so we feel so alive.”

Meanwhile, Mr. Foster-McBride related to the traditional Chinese spiritual beliefs depicted, saying, “I think in most cultures, people have a close relationship with God and higher beings.”

“It’s an important part of civilisation where you come from,” he added to what Ms. Mendes said.

Both expressed a wish that people in mainland China, where the production is banned, get the chance to see Shen Yun one day.

Reporting by NTD and Caden Pearson.