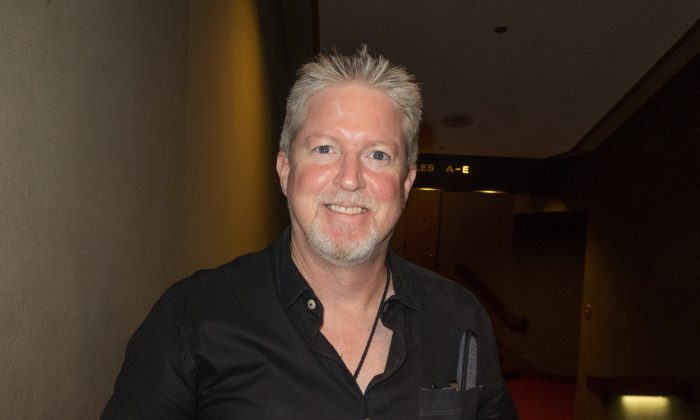 Patrick Darling saw a connection between heaven and earth in Shen Yun at the Sacramento Community Center Theater on Jan 13. (Alex Ma/Epoch Times)

SACRAMENTO, Calif.—One man found a universal beauty in Shen Yun Performing Arts. “The peace and joy for all, that we all came from the same place, which is goodness and love, just came across with the music and the dance,” Patrick Darling said. “That’s very much the core part of my being so I really related to that, the imagery, of heaven on earth, the two as one … definitely a divine message.”

Mr. Darling was particularly moved by the music—the orchestra, and the erhu solo by Xiaochun Qi.

“I was captivated by that,” he said of the erhu solo.

The New York-based Shen Yun travels with an orchestra that blends classical Western and traditional Chinese instruments, playing original scores composed to perfectly accompany the dances and immerse the audience.

“I hear the kind of a European historic music, with the Chinese, and the two together is like a unified music. Which talks to all of us. It speaks to all of us.”

“It was fabulous,” said Mr. Darling. He is an entrepreneur, author and speaker. He saw Shen Yun at the Sacramento Community Center Theater on Jan 13. “It was beautiful; music was just captivating. The colors and the scenes and the dancing, they were absolutely stunning,” he said.

In his work, Mr. Darling aims to help people establish well-being and inner peace and strength, regardless of events around them. He said Shen Yun resonated with his aspirations.

“I think the energy and the spirit that came across through the dance and the music, the joy and the dances, it just really lifted the spirits,” he said. “The feeling in relation to the whole couple of hours … kind of separate from time. We’re in the moment. I’m really enjoying it. It’s just beautiful. Stunning!”

The Shen Yun website states, “Sophisticated dance techniques, an orchestra joining instruments from both the East and West, beautiful costumes, and a stunning back drop—this is Shen Yun at first glance. But digging deeper, one discovers a sea of traditional Chinese culture. Mortals and divine beings merge on stage as one. Principles such as benevolence and justice, propriety and wisdom, respect for the heavens, and divine retribution, all come to life, washing over the audience.”