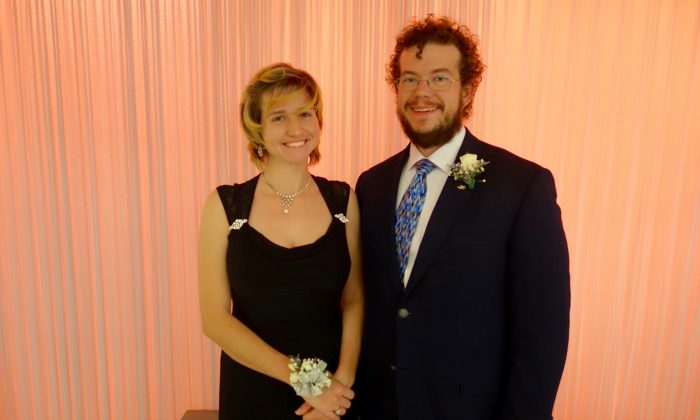 Ms. Erin Brecheen and Mr. Matthew Baumann at Shen Yun at Dr. Phillips Center for the Performing Arts in Orlando, Fla., on Feb. 9, 2016. The couple are engaged. (Mary Silver/Epoch Times)

ORLANDO, Fla.—Matthew Baumann treated his fiancé, Erin Brecheen, to the best seats for Shen Yun Performing Arts, center orchestra. He bought her a corsage of white flowers and wore a matching boutonniere.

Mr. Baumann had wanted to see the classical Chinese dance company for a couple of years. When Ms. Brecheen said she was interested in Shen Yun, he took action.

“They delivered in every way I could possibly imagine,” said Mr. Baumann, who is president of Prosperity Financial Services, and the former mayor of Groveland, Florida. He was expecting skilled dance. He was not expecting depth and spirituality.

The dance “The Steadfast Heart” tells a story set in a town in contemporary China. People are practicing Falun Dafa, the spiritual meditation discipline. Policemen arrive and arrest and beat them. The dance touched Mr. Baumann.

“I’m really glad that they incorporated the oppression of people with different beliefs and gave a voice to that. Just the stress they caused him, imprisoning him, and he was still able to hold on to his faith. It was magnificent—the physical, the spiritual.

“It was just magnificent,” he said.

According to the program book, Shen Yun draws inspiration from China’s 5,000-year-old civilization and the virtues it long embraced—compassion and loyalty, kindness and bravery.

Knowing that the artists are trying to revive their own traditional art forms, and knowing that the company cannot yet visit China, made him proud of America. Shen Yun is based in New York, so he feels America contributes to the artistry of Shen Yun by giving the artists a safe place to work from. “I’m proud that as an American we provide a place for them,” he said.

For Mr. Baumann, the artists of Shen Yun “may inspire people and start new forms of creativity.” “It’s intriguing.”

He is a regular patron of the arts. He saw “Tosca” and the “Barber of Seville” at the Bob Carr Center in Orlando, and noted that the acoustics at the new Dr. Philips Center are better than at Bob Carr. That gave him the best chance to savor the music of Shen Yun.

Soprano Haolan Geng sang “The Moment of Salvation.” She gave an encore after a thunderous ovation with whistles and shouts.

“Oh, she took my breath away. She had the power. She had the feeling. I don’t know how to describe it. I would totally come back to see the next show,” Mr. Baumann said.

Ms. Brecheen is a dancer, and she responded to Shen Yun as a dancer. “It was vivid, and it was refreshing. I actually am a dancer. It was beautiful to see how they were able to draw, collectively, all the energy. You don’t usually see everything so systematically perfect in unison, and yet each part stood alone. It was beautiful, just lovely,” she said.