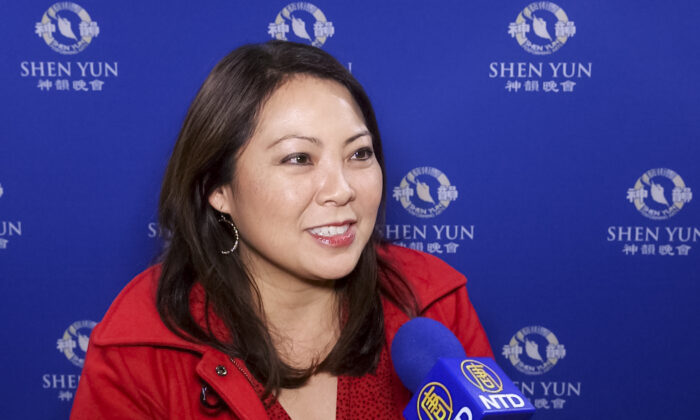 SAN DIEGO—On Chinese New Year, audience members went back in time 5,000 years, and experienced the ancient Chinese culture. For one family, this was the “most wonderful way” for them to kick off the new year watching Shen Yun Performing Arts.

“It was spectacular! All the colors, the beautiful movements … and when the actors and the artists dance, and they tumble, they’re so graceful—it’s almost as if they have wings! I enjoyed it immensely,” said Marcella Lee.

Marcella Lee, a 13-time Emmy winning reporter and news anchor working for KFMB-TV, CBS News, brought her family along to see Shen Yun at the San Diego Civic Theatre on Jan. 25, 2020. Among her family members were her mother and two children.

Lee’s mother was born in China and is now living with Lee and her family in the United States. Being born and raised in the United States, Lee felt that it was important to bring her children to see Shen Yun to experience traditional Chinese arts and culture.

We saw the palaces and all kinds of history here brought into real life in living color for my kids, and that was what was so unique for me.
— Marcella Lee

“It was almost like we took a trip as a family back in time, and got to relive what it might have been like back in the days of the Manchurian [court]. We saw the palaces and all kinds of history here brought into real life in living color for my kids, and that was what was so unique for me, to expose them to some of the Chinese history that dates back thousands of years,” Lee said.

Shen Yun explores 5,000 years of Chinese culture through classical Chinese dance, and a symphony orchestra blending melodies and harmonies of East and West. China was once known as the Middle Kingdom and was said to have a divinely-inspired culture. New York-based Shen Yun seeks to revive this culture that was once almost lost, and Lee staunchly supported this mission.

“Oh, A-plus,” she said. “They get a 100 percent, a 1,000 percent for doing that. You can tell that the people working behind the scenes, the creative directors and the stylistic directors, paid so much attention to detail in really bringing that history to the year 2020. It was just really marvelous.”

The stories of China are portrayed on the stage through classical Chinese dance, which is one of the most athletic and expressive art forms in the world.

Shen Yun’s website states that classical Chinese dance dates back thousands of years, and that dynasty after dynasty it was enriched and refined.

“In China today, it’s regularly mixed with military or modern dance styles to the point that people don’t know what exactly they’re watching. Only Shen Yun performs classical Chinese dance in its purest form, preserving its traditional aesthetic the way it was originally passed down,” states Shen Yun’s website.

Lee said it was almost as if the dancers had strings attached to them and someone was up in the sky lifting them into motion.

“It almost seems not human for them to be able to do what they can do, how high they can jump, how beautifully they can express themselves, almost seems supernatural, so it’s just fantastic,” said Lee.

Lee and her musical family were also impressed with Shen Yun’s unique orchestra.

“Oh, the orchestra was phenomenal. We were so impressed. My kids play piano, so we know classical music, and just to hear all of the Chinese instruments meshing so beautifully with the Western instruments, it was so magical and it matched so well the performers. It was amazing,” said Lee.

Lee said that all of the Shen Yun artists were phenomenal and that she thought each dancer was capable of being a soloist.

“They were mesmerizing, I mean, just beautiful. The way that they move, the flexibility of the artists, and the grace is just like nothing I’ve ever seen. It’s really, really become such an amazing show,” said Lee.

Lee first saw a Shen Yun performance in the early days when the company had just begun. She exclaimed how now, Shen Yun has “just exploded into a phenomenon!”

Shen Yun started with just one dance company in 2006, yet with its growing popularity, it has now expanded into seven equally large companies that simultaneously tour around the world each year.

This time, Lee said that celebrating the new year with her family whilst watching Shen Yun, made the performance even more special.

“This was by far the most wonderful way for my family and me to kick off Chinese New Year,” said Lee.