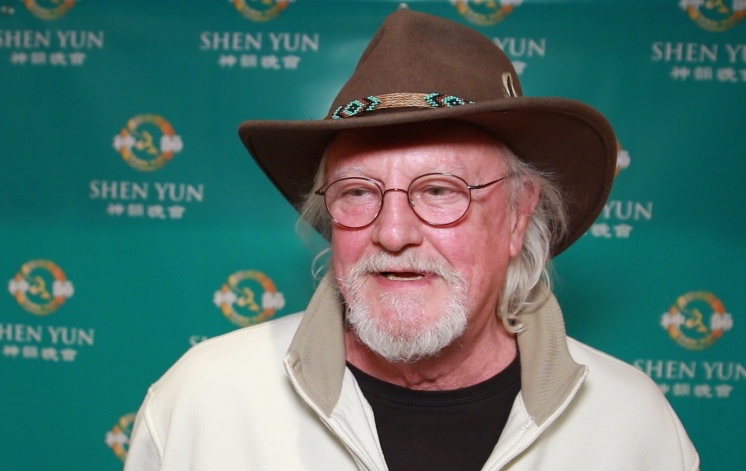 GRAND RAPIDS, Mich.—A past composer for the Super Bowl and the Olympics, Roger Tallman knows a bit about thrilling music. Yet it was the emotional impact of the music he loved about Shen Yun Performing Arts.

“The emotion that was portrayed, not only just on stage, but with the sound and the movement of the orchestra, … how that brought so much life to the stage. What the orchestra does is bring that to life,” Mr. Tallman said.

Shen Yun, based in New York, brings traditional Chinese music and dance to the world—a world often unfamiliar to those of us in the West.

Mr. Tallman feels that it’s fantastic that Shen Yun is “coming around and showing people what the other side of the world has been doing for all these thousands of years.” In fact, he used the word phenomenal four times to describe the performance, when he talked about it after the show.

Taking legends, myths, and actual history from those thousands of years, Shen Yun is able to reveal the essence of traditional Chinese culture.

The diverse and beautiful stories of Shen Yun “compel people to just learn so much about the culture, and I loved it. It was fantastic,” said Mr. Tallman, who attended the Saturday evening performance on Feb. 14 at the DeVos Performance Hall.

In addition to composing for huge sporting events, Mr. Tallman is a seven-time Emmy award winner with 25 years of experience composing and producing music for visual media. He wrote the score for the movie Hail Caesar and themes for NBC Sports, ESPN, and HBO, according to Media Match Music and his LinkedIn site.

“Whoever is doing the arrangements, they did a phenomenal job creating the feelings that the dancers were emoting on stage, and that’s a tough job, especially with the composer and an arranger trying to mix metaphors,” he said.

According to the company’s website: “Western strings, percussion, woodwinds, and brass accentuate the sound of ancient Chinese instruments—like the two-stringed erhu and the plucked pipa. Never before have the exquisite beauty of Chinese melodies and the grandeur of a Western symphony been so seamlessly combined.”

This seamless combination impressed Mr. Tallman, who said that he was exposed to many musical styles from classical to rock, and he thought the orchestra did a “fantastic job of crossing the border” between the cultures.

As a composer, Mr. Tallman has worked quite a bit with Asian music, “Thai orchestras, and some Chinese music.” But yet he found himself listening to different instruments that were new to him, “and brought a lot of character to the score.”

“I think the idea that [they’re] bringing Chinese instruments into the Western orchestra, it’s so unique that it has to catch your attention, and I think that’s what moved me the most within the music … itself,” he said.

He didn’t want to get into the challenges of bridging the different tonal scales of Western and Eastern cultures since that explanation would be too specialized, but felt what was most important was the feeling it evoked.

As far as the other elements of the production, he enjoyed the synchronization of the dancers, the digitally animated backdrops, “something that we don’t’ see here, and that impressed me very much.” In fact, he wants to visit China after seeing them.

In talking about the stories depicting oppression in China today, he said that every people has its struggles, and that gives us a common bond. But nonetheless, each is unique as well, in the “people, their languages, and their styles of music.”

“I’m going to have to tell many people about the experience, that’s for sure, because it’s very unique,” he said.