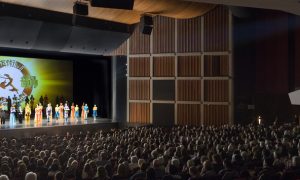 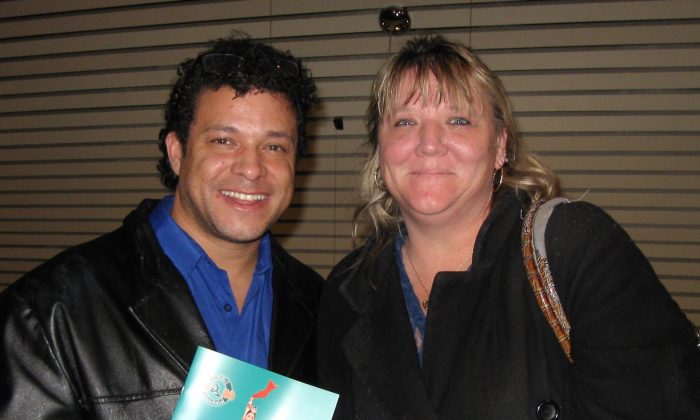 KITCHENER, Canada—Elvis tribute artist Shon Carroll and his wife Tammy were thoroughly impressed with Shen Yun’s performance at Centre In The Square on Tues. Dec. 30.

Shen Yun brings to audiences around the world a revival of 5,000 years of civilization with classical Chinese dance, dazzling animated backdrops, and a unique orchestra blending instruments of the East and West.

Having worked for the past 20 years as an entertainer—he is known for his performances as an Elvis tribute artist—Mr. Carroll is someone who appreciates the arts.

“The background and the music—it’s just phenomenal,” added his wife.

Mr. Carroll was also fascinated by the classical Chinese dance that forms the basis for Shen Yun’s performances.

“It’s very interesting to know that this is such a long, long history of dance culture,” Mr. Carroll said.

Shen Yun’s two bilingual emcees provided introductions to each piece, giving the audience a sense of the depth of the performance.

“A great company of performers,” said Mr. Carroll. “Everything comes together, their timing is really great.”

He was however disappointed to learn Shen Yun isn’t able to perform in China under the communist regime, which has systematically suppressed the traditional Chinese culture the company strives to revive.

“China doesn’t allow this show and that to me is very strange,” Mr. Caroll said. “I don’t understand why they wouldn’t be proud of this kind of performance.

“It makes me interested in knowing what different types of cultures there are in the world.”

Founded in 2006, New York-based Shen Yun has seen rapid growth—now with four companies, each featuring some 100 performers, performing around the world. The International Company performed in Kitchener and will next move to Ottawa for four shows Jan. 2-4, 2015.

As a part of its 2015 world tour, Shen Yun Performing Arts is performing in over 100 cities on five continents, gracing some of the world’s most prestigious stages such as New York’s Lincoln Center, Washington D.C.’s Kennedy Center, and Paris’s Palais des Congrès de Paris.