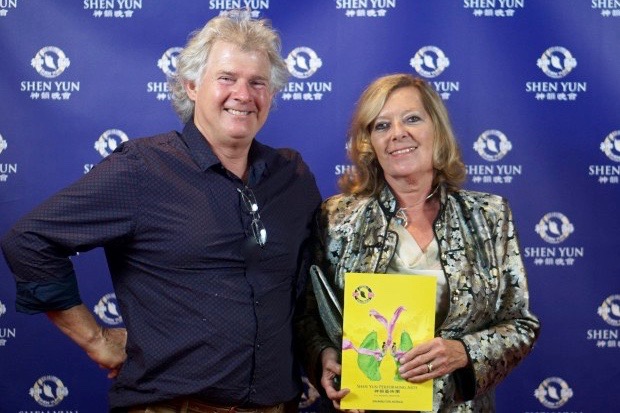 Jenni Mitchell grew up in Eltham and has been actively involved in the region for most of her life. She was elected by the community to serve as a Shire Councilor and has been a leader in local conservation and cultural issues within the region.

She was accompanied by her partner, artist Mervyn Hannan, who is co-owner of the arts gallery, to the Melbourne’s State Theatre on Monday evening, Feb. 22.

They were smitten by the artistry presented throughout the Shen Yun classical Chinese dance and music production.

“It is very artistic,” said Ms. Mitchell. “We were at the front, and it was a great place to be, from the point of view of being able to see and almost touch the fabrics.

“But we can also appreciate that from a distance. You would have been able to see them moving, the whole opening of flowers; this would have been more apparent, perhaps, than from where we were. But I like to get that close … that was really special,” she said.

In one of the dances, “Sleeves of the Sui Dynasty” in a pavilion of flowers, maidens wearing ‘water sleeves’ dance across the stage, using long silk sleeves that sway as gentle as a soft breeze, or are spun as fast as a dancer spins.

Every costume is presented with brilliant colors, displaying a splendid spectacle—from the Tang Dynasty’s “Raiment of Rainbows and Feathers” to imperial dragon robes, phoenix coronets, and cloud capes; from the civil official’s headdress and robes to the warrior’s helmet and armor; and from the traditional rightward cross-collared Han clothing to the ethnic attire of the Manchurian, Tibetan, Dai, Mongol, and Uyghur ethnic groups, the company website says.

As a photographer and painter Ms. Mitchell would have liked to have taken pictures of the costumes, but she was unable to because of copyright.

“I wanted to photograph and take the images with me. That was the thing that I got from it … it was disappointing that I wasn’t able to do that. I could look at the fabrics, and I was kind of imaging them,” she said.

Mr. Hannan laughed, saying, “You can take away those images in your head—they’re beautiful.”

Shen Yun weaves a wondrous tapestry of heavenly realms, ancient legends, and modern heroic tales, taking you on a journey through 5,000 years of Chinese culture. Its stunning beauty and tremendous energy leave audiences uplifted and inspired, the company website said.

“Well, it did that,” Mr. Hannan said, referring to the interaction between the digital backdrops behind the dancers and a performance onstage.

“You actually went above and below, and the way they used the visuals of the people, and then going off into the other world—jumping into the screen. That was very well done.”