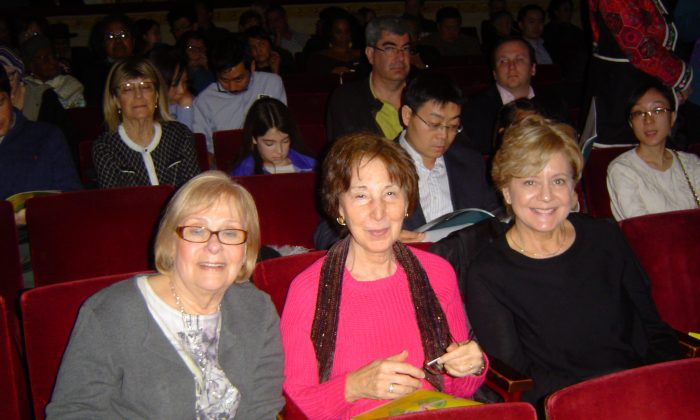 PHILADELPHIA—As the director of the Montessori teaching program at Chestnut Hill College, Janet Colaianni knows all the ins and outs of teaching young children. When she saw Shen Yun Performing Arts with friends on Jan. 10, she saw tremendous educational value.

The performance not only covered 5,000 years of China’s divinely inspired civilization, but brought forth principles of ancient Chinese values, such as wisdom and propriety, compassion, and respect for the heavens. Ms. Colaianni saw the last of four Philadelphia performances at the Academy of Music on Jan. 10 with friends Vunny Verbit, Linda Stulz, and Barbara Anniballi, all educators.

“All of the values that this performance is bringing out reinforces all those values that we like to pass on to children in order to have a more compassionate, peaceful world,” Ms. Colaianni said. “The whole idea [is] of helping children with peace, education, and compassion, tolerance, forgiveness.”

Ms. Stulz, school director and admissions director for early childhood education, had similar thoughts. She thought Shen Yun’s touring the world helped to “pass on the beauty and the beliefs” of ancient China. Ms. Stulz said that included Falun Dafa, the spiritual practice rooted in ancient beliefs and truthfulness, compassion, and tolerance, which was mentioned in the program.

It is a spiritual practice still persecuted in China under the communist regime, the educators noted, and something they hoped Shen Yun would help change.

“If you were allowed to have that religion, then you could meditate and have compassion and hopefully would be more peaceful,” Ms. Stulz said.

“I just thought that there’s something more than the here and now. There’s more to life than what is right here,” said Mr. Hamilton, who teaches horticulture in New Jersey.

That “something more” was found in the traditional Chinese culture the Hamiltons saw revived by New York-based Shen Yun on Jan. 9 at the Academy of Music in Philadelphia.

Through what the Hamiltons called impressive choreography and color, the performers conveyed 5,000 years of divinely inspired Chinese civilization.

Mr. Hamilton said the message of Shen Yun is that the true culture of China is a spiritual one. Mrs. Hamilton agreed.

“It’s so nice to see a different culture brought to life here in their story-telling, their beauty of their dance, and their spiritual overall being. They alluded to a higher being,” she said.

The presence of a higher being served as a reminder. It signaled hope for the future, and reminded them to be good in the present.

The educational value was tremendous. Mr. Hamilton said this idea of a bigger picture was something he wanted to teach his students.

Mr. Hamilton also learned that this traditional spiritual culture is suppressed in China, where the communist regime has tried to destroy it. He felt this was a a great loss.

“Good thing that people have revived it,” Mr. Hamilton said.