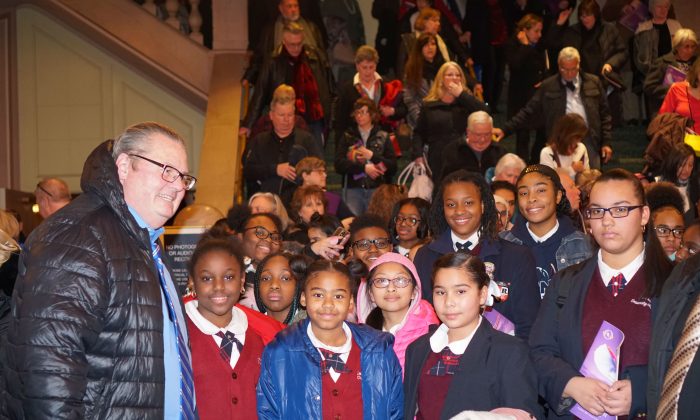 PHILADELPHIA—Vice-principal of a New Jersey charter school Scott Lunn was looking for a cultural experience to take his students to.

He decided on Shen Yun Performing Arts, and brought more than 40 students from LEAP Academy University Charter School to see the performance at Philadelphia’s Merriam Theater on Feb. 28.

The performance was everything the vice-principal was looking for.

“It was inspirational, extravagant. It was beautiful,” Lunn said.

“We totally enjoyed it.”

The students enjoyed the production too. One pupil said she liked the dancers’ costumes in the ethnic dance, “The Charming Ladies of the Yi,” especially how the rainbow skirts looked like flowers when the dancers turned.

Founded in 2006, Shen Yun Performing Arts seeks to distill 5,000 years of traditional Chinese culture through artistic expression, via music and dance. The New York-based company tours the world every year, performing an annually-updated program that consists of classical Chinese dance and ethnic dance vignettes, dance-based stories, and vocal soloists, with each piece being accompanied by an original score played by a live orchestra.

Lunn, who is a former mayor of the Borough of Barrington in New Jersey, thought that the music played by the orchestra was beautiful, as it combined both Chinese and Western instruments.

With the sound of a traditional Western symphony orchestra as its base, Shen Yun’s orchestra overlays melodies carried by Chinese instruments to add a level of expressiveness and richness to the composition.

As an educator, Lunn thought that the performance’s spiritual message was most helpful for his students.

“[The message was] that we should all help humankind, and be good,” he said.

Lunn said that that was exactly the kind of values that he promoted at his school.

The values portrayed through the performance, in its stories, and lyrics sung by the vocalists, have lay at the heart of China’s deeply spiritual culture. For thousands of years, Chinese believed in Heaven, or the divine, and thus lived their lives in accordance with virtues stemming from this belief. These included righteousness, benevolence, propriety, and loyalty.

This traditional culture, however, cannot be seen in China today after it was targeted during multiple political campaigns waged by the Chinese Communist Party, most notably the Cultural Revolution, which systematically sought to destroy traditional Chinese beliefs, customs, and ideas.

Because Shen Yun aims to revive this culture, along with the fact it depicts communist repression of faith still occurring today, the company is prevented from performing in China.

“I think they should bring it back [to China] because this is beautiful, and [it should be] spread all over the world,” he said.

With reporting by Lily Sun.