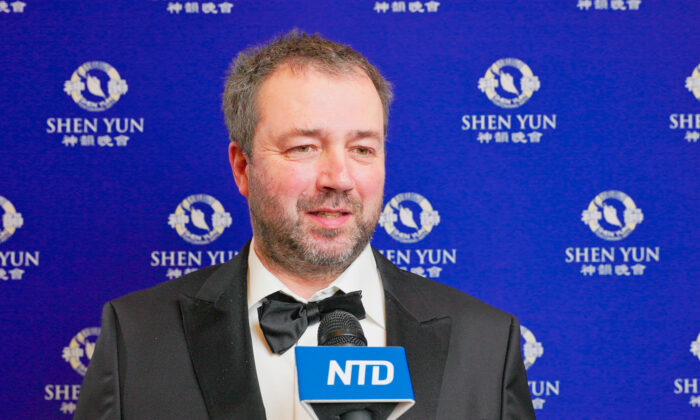 SALZBURG, Austria—Wilfried Düx, software development manager and partner at Mentz GmbH in Munich, was impressed by the Shen Yun Performing Arts performance at the Großes Festspielhaus on Jan. 24.

“Especially the smooth transitions from the stage to the background in the set were very appealing and cleverly done. Shen Yun is very beautiful, it’s colorful and contains many dynamics,” he said.

“One learns something from the old Chinese tradition, but I also liked the reference to the current situation in China. It’s very good to include something like that,” he explained.

‘We Are Glad We Are Here’

“We are glad we are here,” said Chief Inspector Hans-Jürgen Hofinger, summarizing his impressions of Shen Yun that he watched with his wife Hannelore Malzner

“It is absolutely worth seeing, we are delighted—one can see the culture, of course, with the past history and also the problems that … they obviously have,” said Detective Hofinger who is from the Vöklabruck district police.

“Very impressive was the elegance of the dancers and these colors! It seems insanely light dance-wise, even though one knows it’s not. And the stage design, it’s all very well coordinated,” Hofinger said.

His wife agreed. “This array of colors … the colors of the costumes were very impressive,” she said.

Hofinger particularly liked the interaction between the animated stage screen and the dancers on stage.

“When the dancers suddenly appear on stage [as if out of nowhere]. That was absolutely impressive and very interestingly done,” he said. “It was a very successful performance.”

The visual merging of digital background images and stage action is a Shen Yun invention giving the impression that performers can effortlessly move back and forth, so to speak, between the stage and the animated background.

‘Music Is So Beautiful’

“I was surprised by this array of colors and these dance pieces,” Trattner said.

For him, the whole evening was a pleasant surprise. Not until shortly before the performance, did he know what to expect, because he was invited by a friend.

As an amateur musician, he was particularly excited about the music.

“The music is so beautiful. I can’t see into the orchestra pit, but I assume it’s a big orchestra,” he said. “It’s very musical, very colorful, and just enchanting.”

The Shen Yun orchestra is special as it harmoniously combines Chinese and Western musical traditions.

“Fantastic! Breathtaking! Hard to put into words!” That was how Natalie Derndorfer described her impressions of the Shen Yun performance.

“The choreography was really fantastic and the music a dream!” she said.

The orchestra was … mind-blowing … the colors from the outfits, fantastic culture. It touched me!”

Derndorfer, who is responsible for finance at the Sattledt municipal office in Upper Austria, said she is also taking a lot of other things from the show with her.

“Pausing, becoming calmer and enjoying, and perhaps going back a bit to the roots, to the origin. Not everything modern is always good,” she said.

“I think that very good, very solid values, were shown, which we should once again call to mind, remember and also now in everyday life,” Derndorfer continued.

“I think one should think more about the past, one’s roots, and not just live in modern times.”