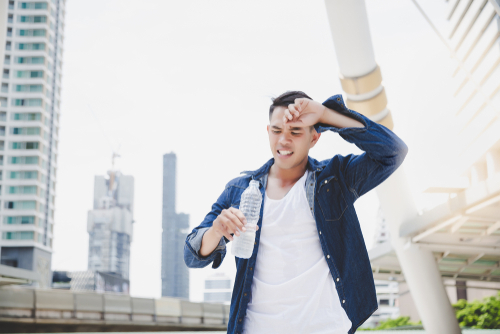 Our modern, urban lifestyles leave us stressed and anxious, which increases our body’s demand for fluid, all while dry indoor air dehydrates us further. (shutterstock)
Mind & Body

Curing the epidemic of dehydration that is leaving us prone to illness takes more than water
BY Conan Milner
TIMESeptember 28, 2020

It’s always been clear that water is essential to life. But science is still discovering new levels to this very deep relationship.

By weight, an average adult human can be up to 60 percent water (children up to 75 percent).

But if you consider our composition in terms of molecules, we’re practically all water—nearly 99 percent. Water molecules are so tiny compared to the other types of molecules in our body that we can fit many more inside of us. And we need them all.

Every aspect of our physiology relies on water to function. It gives fluidity to blood, lubricates joints, and carries waste and nutrients in and out of each cell. Our lives are so water-dependent that we would perish in just a few days without it.

We understand our need for water more than ever, yet we still struggle to get enough. One estimate by researchers at New York Hospital found as many as 75 percent of Americans may suffer from chronic, low-level dehydration.

We have indoor plumbing, a staggering variety of beverage options, and constant reminders to drink more. So what’s the problem? According to integrative physician Dr. Dana Cohen and cultural anthropologist Gina Bria, one major reason is that modern life dries us out.

In their book, “Quench: Beat Fatigue, Drop Weight, and Heal Your Body Through the New Science of Optimum Hydration,” Cohen and Bria highlight multiple factors that contribute to our chronic water loss in the 21st century.  We may have easy access to water, but moisture is being sucked from our bodies in ways our ancestors never experienced.

“Take a fresh look and see the environment that surrounds us,” Bria said. “Our lack of sunlight and fresh air, the diminished capacity of our foods, the level of social isolation, coupled with the anxiety and pressures we have in our culture. All of that requires more buoyancy to cope with. We need more efficient hydration than we used to.”

One factor drying us out is all the time we spend inside. Some of our hydration comes from the moisture in the air we breathe or absorb through our skin, and indoor air is significantly drier and less oxygenated than outdoor air. Our moisture-hungry bodies were not designed to spend so much time in tightly sealed, climate-controlled capsules. Airplanes are the worst offenders, but riding for hours in a car with the windows rolled up can take a toll, too.

Cellphones are another dehydrating factor. There’s heated debate about how much of an impact all the microwave radiation emanating from these devices has on our cells, but it is clear that our habits leave a mark on our biology. Because we have to manufacture a new round of neurochemicals every time we refocus our attention, all of that scrolling and multitasking adds a small but steady drain on our body’s water.

On top of this, we’re often out of touch with our thirst. Cohen says many of us have conditioned ourselves to ignore it.

“Thirst is not a great guide, because by the time you’re thirsty, I think you’re already a little too dehydrated,” she said. “An earlier sign is fatigue and brain fog.”

Some people intentionally don’t drink as much as they know they should because urination is an inconvenience. If we’re busy, or just lazy, going to the bathroom can seem like a chore.

But our bodies are designed to get up and pee every two to three hours. We make a hormone that stops this cycle so can we sleep through the night. But it works much better for those who drink enough during the day.

“The irony is that this hormone is made when we have a high-functioning system,” Bria said. “The more dehydrated you are, the more likely it is you won’t have that hormone and you’re going to be getting up during the night.”

Modern medicine excels at diagnosing and treating severe dehydration (a loss of more than 10 percent of total body water). Doctors rarely consider mild dehydration as a cause for disease, however, despite evidence for numerous health consequences linked to it: headaches, poor concentration, fatigue, and anxiety, as well as constipation, muscle cramps, and more.

And it doesn’t take much water loss to make an impact. One study found that women performed worse on cognitive tests when they were just 1 percent dehydrated. Another study found that just 2 percent dehydration impacted blood vessels as much as smoking a cigarette. Preliminary research suggests that chronic, low-grade dehydration could even be a major cause behind obesity, diabetes, hypertension, and Alzheimer’s.

Since water is vital in so many ways, Cohen always urges her patients to consider if poor hydration may be at the heart of their health problems.

“I see patients every day who have seen many doctors, and nobody can tell them what’s wrong with them,” she said. “Dehydration is the mother of all epidemics, and it’s the first step we need to take in addressing chronic disease.”

In addition to the contemporary drains on our hydration, we lose between two and three liters of water each day the old fashioned way—through breath, sweat, urine, and bowel movements. We need a regular strategy to replace it all.

We’re often told that nothing hydrates us as well as plain water, but there are far superior sources.

One example is found in Chris McDougall’s bestselling book “Born to Run: A Hidden Tribe, Superathletes, and the Greatest Race the World Has Ever Seen.” It showcases the Tarahumara people of northwestern Mexico. Young men from this tribe run 50-mile marathons for fun. They keep themselves hydrated not with plain water, but a mixture of fermented corn beer and chia—a seed that turns gelatinous when soaked in liquid.

Compare this to the eight-glasses-a-day advice we commonly hear today. We think it replenishes, but it may actually be setting us back by flushing out electrolytes and nutrients that facilitate hydration.

“When we go to rehydrate, we’re doing it with compromised water. It’s either full of other chemicals, or, if it’s filtered, it has a loss of minerals which drives the energy inside the water,” Bria said. “The body has to work harder with this water in an already dehydrating environment.”

Hydration isn’t necessarily about the quantity of liquid you consume, but about how well your tissues absorb it. That’s why Cohen and Bria recommend that we increase our consumption of juicy plants.

There are special qualities to the water found in plants that make them so hydrating. First, the fiber in fresh fruits and vegetables helps us retain moisture so our cells have more time to integrate it. Plus, it comes already purified, alkaline, nutrient- and mineral-rich, and easier for our cells to absorb.

Water that comes from our tap has been chlorinated to remove any potentially dangerous microbes and is often fluoridated for supposed protection from cavities. It usually lacks the mineral content of water found in nature, and has none of the added nutritional benefits of water found in plants.

Cucumber, watermelon, and iceberg lettuce are rich sources of natural water, as is aloe vera, but all fruits and vegetables, unless dehydrated, are sources of water.

Bria and Cohen support fresh juices, but they prefer smoothies for the added fiber. Their book contains several smoothie recipes using various combinations of water-rich plants, a pinch of sea salt to boost mineral content, and ground chia seed. They also recommend strengthening the hydration potential of plain water by adding some plant power—such as freshly squeezed lemon, a sprig of mint, or a chamomile tea bag.

Moving Our Body of Water

Another unexpected strategy for improving our hydration is movement. Once we drink our smoothie or lemon water, the moisture still needs to be delivered to each cell, and if we don’t move enough, many cells may not get their fill.

His work is revolutionary because fascia was previously considered an inconsequential bit of tissue, sort of like biological packing material stuffed around the more important structures like muscles and organs.

Guimberteau demonstrated that fascia moves water and conducts electricity. This means that if the fascia is hard and stagnant, hydration has a hard time reaching neighboring cells, eventually leading to pain or other problems. But just a little movement can get things flowing.

“It’s very instinctual because we know we have to move our joints to lubricate them. Now we really understand why,” Cohen said.

To hydrate down to the cellular level, Bria and Cohen recommend what they call micromovements—small gestures to stimulate fascia. Micromovements require much less commitment and exertion than a full exercise routine, but over time they may inspire one.

“Micromovements are ways to keep this swish of fluid going through our system,” Bria said. “Just jiggle. Get up. Just with that, I have more mobility and flexibility than when I am just sitting there.”

Bria’s comments are confirmed to some extent by a study published in 2016 that looked at nearly 13,000 British women who sat for seven hours a day.

For those who didn’t fidget, sitting for more than seven hours a day was associated with 30 percent increased all-cause mortality risk. But women in the medium or high category for fidgeting saw no increase in risk due to sitting time.

In the modern environment, our movement is often constrained. Micromovements are a way to adapt. Plus, they feel great.

“When you understand how much movement shifts water through us, you want to start your own experience of fluidity,” Bria said.

While micromovements can be helpful, there is no replacement for high-quality exercise or getting out and using your body more extensively. Walking and gardening offer gentle forms of exercise with well-documented health benefits. 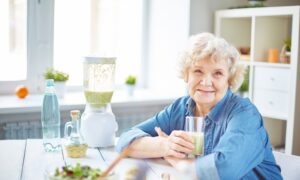 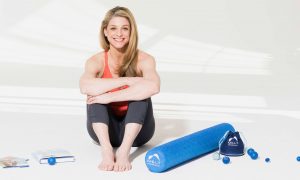 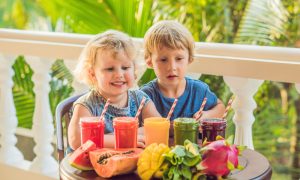