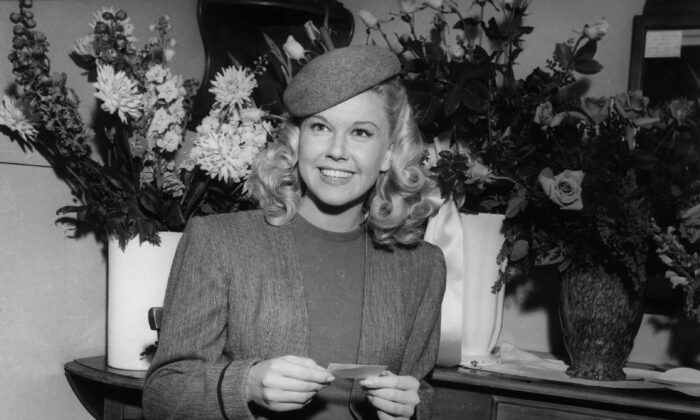 American actress and singer Doris Day in her dressing room on the set of “Romance on the High Seas.” (Hulton Archive/Getty Images)
Film Reviews

St. Valentine’s Day is over, but the coming of spring always foretells the coming of love! Nothing pairs better with leftover Valentine candy than classic romantic films. The Golden Era of Hollywood developed some of the most iconic love stories, like “Casablanca” (1942) and “Gone with the Wind” (1939). However, not all classic romances are epic dramas. Some of the most endearing are lighthearted tales of love, music, and laughter.

Such are Doris Day’s first two films, “Romance on the High Seas” (1948) and “My Dream Is Yours” (1949). These two Warner Bros. musicals established the pretty blonde and popular singer as a movie star and a Hollywood personality.

Besides these vital contributors, these movies both have endearing love stories about people finding romance in unexpected situations. Each shows that true love can mean giving up your beloved for his or her ultimate happiness.

‘Romance on the High Seas’

Georgia Garrett (Day) is a vivacious nightclub singer who haunts a travel agency, although she can’t afford to take the lavish trips she plans. A rare opportunity comes her way when socialite Elvira Kent (Janis Paige) offers her a three-month South American cruise, all expenses paid. The only catch is that she must pretend to be Mrs. Kent during the trip, while the real Elvira stays in New York to monitor the fidelity of her husband, Michael (Don DeFore).

Little does Elvira know that her husband likewise suspects her, so he has hired private detective Peter Virgil (Carson) to shadow her during the cruise. Peter and Georgia soon meet, but their immediate attraction is hindered by the complicated deceptions. Can they discover the truth about each other as they navigate romance on the high seas?

Peter’s first reaction to Georgia posing as Elvira is “WOW!” Nevertheless, as he assured Michael, his policy is “Never kiss a client’s wife.” Similarly, Elvira warns Georgia: “While it’s your lips that are being kissed, it’s my reputation that’s suffering.”

However, both mottos are sidelined, if not forgotten, during the cruise. Peter and Georgia both struggle with ethics. Peter wants to fall in love with Georgia, but he wishes she weren’t married. Georgia wants to tell Peter that she is single, but she fears he’ll resent her deception.

Although they are in love with each other, Peter and “Elvira” admirably fight their attraction because they respect matrimony. Peter eventually sacrifices his own happiness by leaving Rio when Mr. Kent arrives, telling him to go to his wife. Fortunately, the girl he loves isn’t really married, so they have a chance for happiness.

This movie shows the romance and glamour of ocean cruises in the late 1940s. With World War II over, people were enjoying leisure travel again. The cruise that Georgia and Peter take goes to South America, stopping in Cuba, Trinidad, and Rio de Janeiro. These tropical destinations are great opportunities for local color and Latin-themed music.  For example, the cruise stops long enough in Rio for passengers to stay at a hotel during Carnival time. Yet the ship itself looks luxurious and entertaining enough to entice one to stay onboard for the whole three-month duration.

As Doris sings about falling in love in Cuba, “It’s magic”; this could be describing the whole film!

‘My Dream Is Yours’

When conceited singer Gary Mitchell (Lee Bowman) refuses to renew his radio program contract, his agent, Doug Blake (Carson), vows to find a new artist to replace him. He discovers Martha Gibson (Day) when she sings along with a record, having been tipped off by her bartender uncle (Edgar Kennedy).

Using his reluctant business partner, Vivian (Eve Arden), as financier, Doug flies Martha out to Hollywood. The young war widow sadly leaves her young son, Freddie (Duncan Richardson), with her uncle when Doug convinces her to establish her career before sending for the boy.

Martha fails to land a contract at her first audition, but she gains Gary Mitchell’s attention. As Martha develops a casual romance with Gary, Doug pretends he’s upset only because he dislikes Gary, not because he loves Martha. Meanwhile, they realize that she’s been unsuccessful because she’s been singing the wrong material.

Doug insists there is nothing romantic between him and Martha, but he is very jealous when she goes out with Gary Mitchell. He thinks Gary is a conceited heel, but he is especially upset to see his protégée dazzled by his treacherous former client. When he questions Martha’s feelings for Gary, she insists it is just for laughs. However, that evening, they end up passionately kissing.

Gary says that he could help Martha achieve success, but she won’t fire Doug. When Martha replaces drunken Gary on a radio program, Gary feels betrayed. She becomes famous but can’t forget Gary, feeling that her success is incomplete without him.

At the same time, Doug loves Martha himself, even loving Freddie as his own son, but he arranges Gary’s comeback for Martha’s sake. He proves his love by helping her get the man she loves, even though Gary cares only about himself.

This movie shows Hollywood’s heyday. Scenes take place in famous, bygone Tinseltown locations like the Brown Derby and the Coco Palms. It also gives a glimpse into the world of radio broadcasting in the late 1940s. A special treat is Freddie’s semianimated Easter dream sequence, which includes Bugs Bunny and Tweety performing alongside Doris Day and Jack Carson costumed as giant rabbits!

Because of the live audience, the visual experience is almost as important as the audio broadcast. The all-female orchestra members wear beautiful matching gowns, and soloist Gary Mitchell wears a striking white dinner jacket. The radio program is called “Hofer’s Hour of Enchantment,” and the beautiful music sung by Doris Day makes it so.

Doris Day has been called America’s sweetheart. These two films cemented her Hollywood stardom, endearing her to the public. In both films, she plays a perky singer waiting for her big break. While finding opportunities, her characters unexpectedly find romance.

Similar though the characters are, Doris’s progression as a Hollywood performer can be seen in comparing these two films. The role of Georgia Garrett was intended for Betty Hutton, who dropped out because of impending motherhood. Several other actresses were considered for the role before newcomer Doris Day was cast. Since it was her first film, she was billed fourth.

After the success of “Romance on the High Seas,” Doris’s next film role was built around her previous experiences. Like Martha Gibson, Doris was a popular radio singer and recording artist before becoming a film star, and she also had to leave her son with a relative while pursuing her career. Doris was encouraged to imitate Betty Hutton’s enthusiastic singing style during her screen test. Just as Martha is unsuccessful until she starts singing tender ballads, Doris shone only when she used her natural, relaxed style.

As you continue celebrating the season of love, watch these two charming romantic musicals! “Romance on the High Seas” and “My Dream Is Yours” are not the most famous love stories from Hollywood’s Golden Era, just as Doris Day and Jack Carson aren’t classic Hollywood’s most iconic couple. However, these simple, sweet love stories are endearing, heartwarming, and illustrative of what love really is. Both stories show that sometimes the best way to prove and win your love is to sacrifice your own happiness.